I have been up past midnight downloading and installing the latest Garmin European map updates. It cost £100 for a ‘lifetime’ account for unlimited map updates. Geoff says, at my age I should consider this a real bargain. But actually its the lifetime of the GPS that is more the question.
I’ve also discovered the European Speed Camera Database. For €10 you get a POI download – not that I intend to speed all over Europe – just England. So I will see what its like. The Cyclops database that came with my Garmin contains lots of false positives. The SCDB has a link which is:

The bike’s booked in for a service now so I am nearly ready to head off for two weeks at the end of June.. The Leatherman tool that I bought came in a tin can with ‘no you are ready to go’ printed on the outside.

Yesterday was my mother’s 84th birthday and I rode down the 65 mile journey to Ruislip to see her. Last year on her birthday I did exactly the same and I had just picked up the bike I’m riding now so, one year of riding it, what do I think of it – and how is it running?

I remember that it felt so much like a real bike and made the Bandit 600 that I owned previously feel rather tinny in comparison. The Triumph feels much more solid, sophisticated (it has a radiator and a fuel gauge!), and has what people call grunt. Now that I’ve ridden for a year and 2000 miles, including two brief continental trips I can confirm that this is a comfortable and capable bike. In Germany, about 8 hours riding one day left me with a tired right hand but no back ache, sore bottom or any other debilitating pain. The bike can also achieve some nice speeds with little drama. Its wind noise and blast that limit speed, apart from nerve and the law. The speedo has read over 100 on occasions, once for longer than a few seconds, but my GPS has showed me that the speedo consistently over estimates speed by 6mph. It is, so far, reliable and has never stopped or refused to start. And having spent a year, many hours on ebay and a few hundred pounds, on Triumph luggage, it is sorted for more tours. So, is there anything I would change? Well, the colour – I would never have chosen a blue bike; maybe a taller winsdscreen – which I can do anyway. And it is rather top heavy. In a slow sharp turn I’ve often felt that I was going to topple inwards. The only reason to change would be to try something different – like a big trail type bike.

The demands of work have never been far away on this trip and I have missed a couple of things by accident not quite realising that if I were sitting in Denmark I wouldn’t be able to attend meetings in north London.

I had to check out of my motel by 11am which gave me many, rather too many hours to kill to get back the 120k to Esbjerg. The previous night I had tapped in the address of the ferry terminal into my GPS (or so I thought). I took the slow route toward Middlefart with the intention of finding some unsuspecting passer-by to photograph me standing, winking perhaps, next to a sign of the town name. (Thank gooodness I didn’t.) Having bumped into Jack Dowie, world expert in decision-making, earlier before I left, I was asking myself why I then took a turn that meant I would avoid this town with the childishly funny name and hit the motorway instead. Its not what I wanted to do but somehow presented with the opportunity to turn left toward the green motorway sign, I did it. In a motorway picnic area I had my first furtively made-at-the-motel-from-breakfast cheese sandwich. The sun was still shining beautifully. I worked out how to add a detour to my GPS route (I mean intentionally add one) and exited the rather boring motorway for some much nicer A class roads. By now I was not wanting the ride to end and thought about heading down south toward some other towns before going back up but, a little sooner than I expected, my GPS was telling me to turn off toward the ferry terminal. At the time I didn’t think it strange that we were nowhere near any water but I obeyed and started down what looked like a track to a farm with a cul-de-sac sign very visibly by it. In fact it turned out to be a farm track leading to a farm (but usually there is a barking dog in these situations – today there wasn’t). How strange. When I did arrive near the port I realised that probably human error accounted for this. Once I’d put in the correct address I was brought there easily.

There was one other biker and I got into the queue with him. He was riding a blue Yamaha trail bike (that exactly matched my colour) and had been camping for a fortnight in Denmark and Sweden. He showed me his impeccably packed bags which included a full toolkit. This has renewed my slightly flagging enthusiasm to go camping in June – next month! Looking back I can see that this traveller was years ahead of the ‘light is right’ bike movement, complete with soft luggage and extensive toolkit. 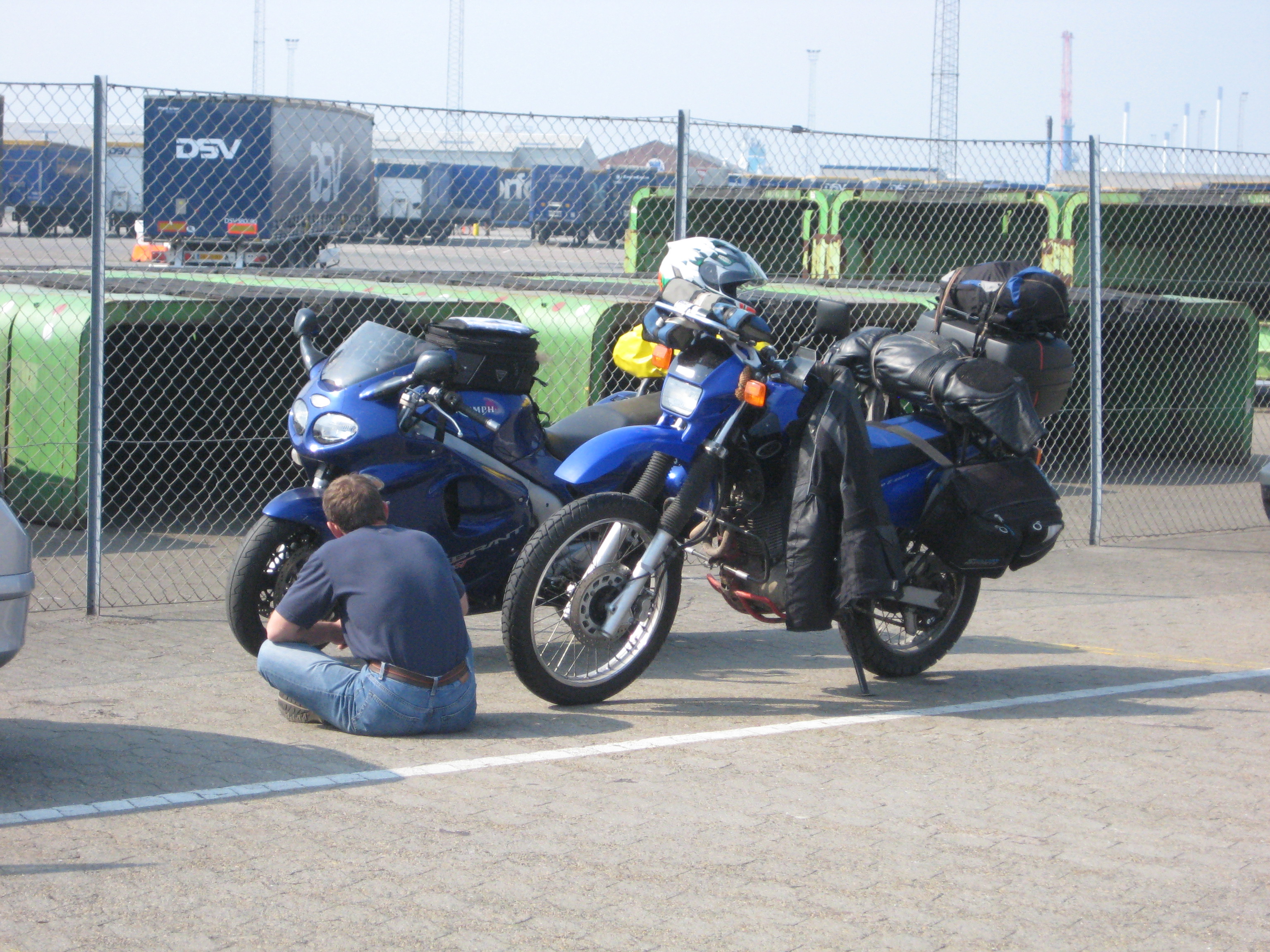 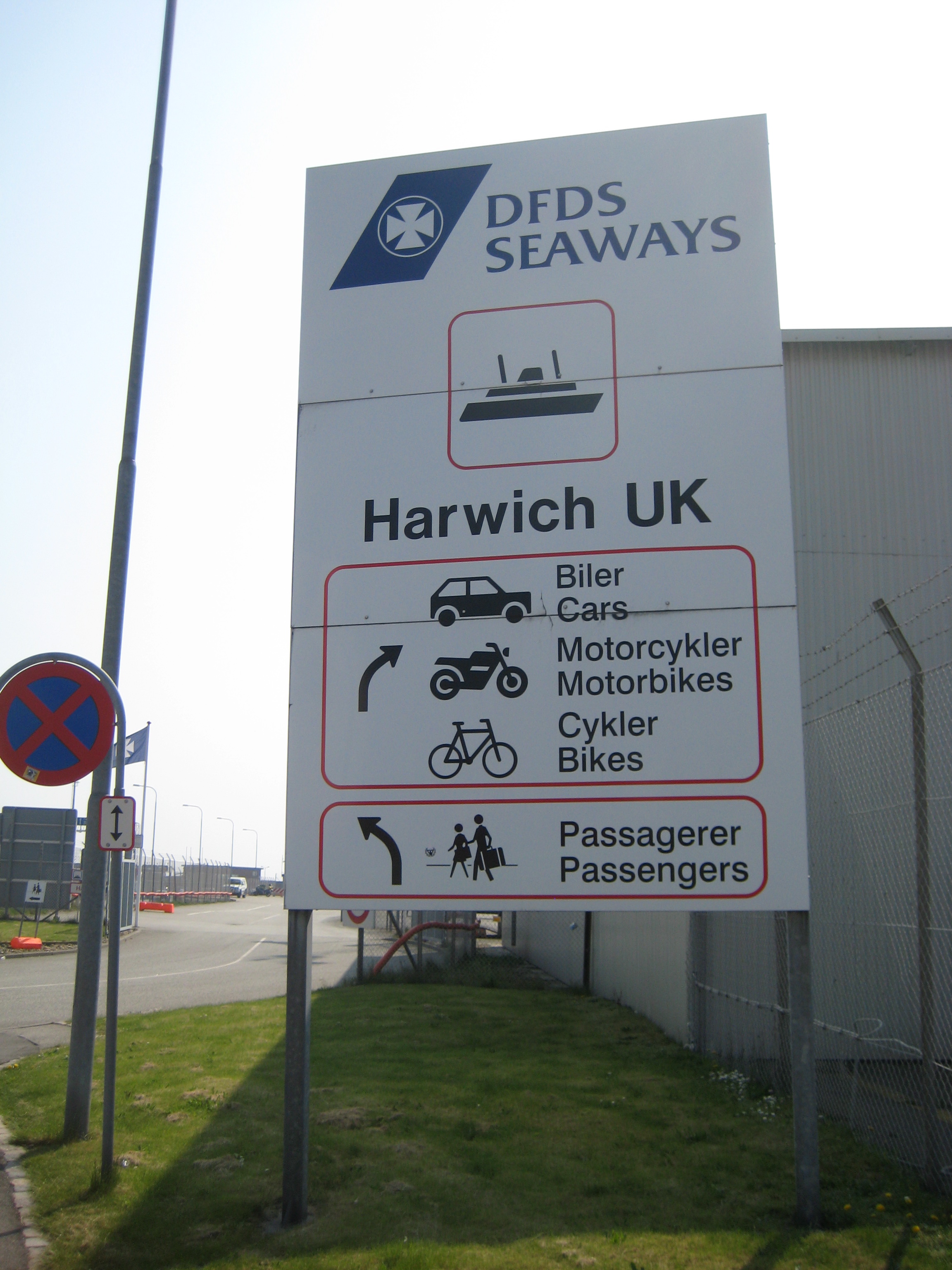 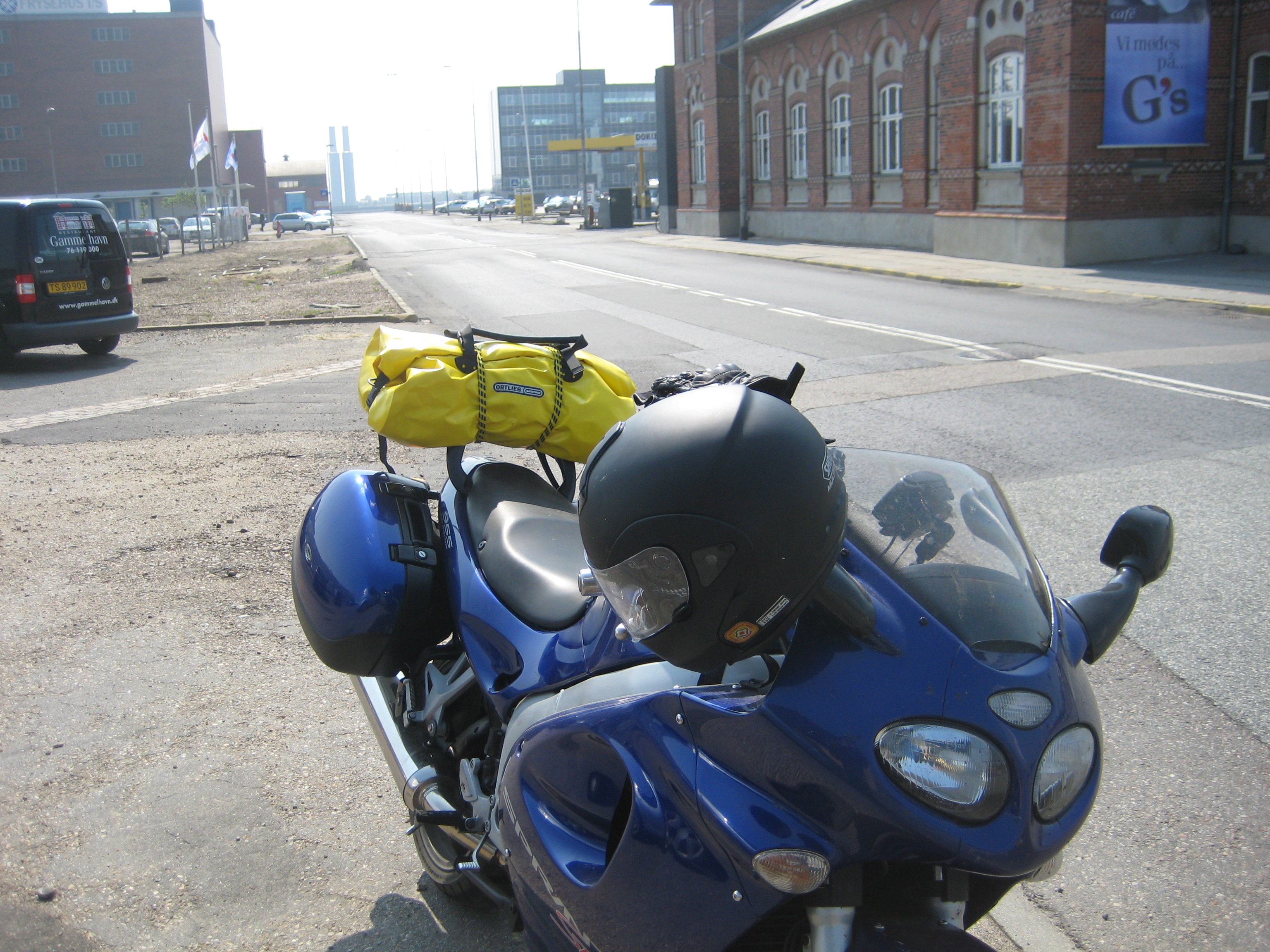 Also in the queue and sitting very firmly at the front was an English gentleman, heavily bearded in his 50s sitting in a beautifully restored 1936 three wheeler (I don’t know the make). On the ground next to the painstakingly polished chrome wheel arch is his similarly shiny chrome thermos flask. He is a fanatical engineer/restorer and also owns, he told me, a 1970s Ducati motorbike. He is reading a German ‘Oldtimer’ magazine which is about men restoring old cars and bikes – with photographs aplenty. He says I can keep it and I realise I’ve left it on the floor of the car deck. – I found it later.)
He engages in detailed mechanical conversation with the Yamaha rider who is also mechanically informed. I wonder for a while whether my next life project should be to become similarly informed and tooled up. I decide not to. Now I engage in talk with him. He is a ship designer. In fact he designed the enormous ship we are about to board. Its 5 years old which apparently is quite old for a ship. He left school at 14 and went into the navy where he started his design career and has been doing it ever since, spending much of the year in the few remaining European cities that still build ships, the Brits having stopped some years ago. He tells me that most ships are made in China or Korea nowadays. He has an intense gaze and speaks with a slight pressure. He’s fanatical about these mechanical things. He says he lives in Cornwall. Somehow I don’t think he has a wife and children as part of his life. We talk about VW Beetles we have both owned and I am shocked that I can remember mechanical details of these cars. My first one had 6volt electrics for example. I can imagine him as a mountaineer. I am attracted to something about the mechanical universe that men like him seem to live in, instead of mine full of doubt, complication and anxiety.

Once on the ferry I am now wise to their huge process (I meant to type ‘prices’) and have my supply of food and wine in my bag. My dinner on the way over cost £52, partly because I had a bizarre misconception about the exchange rate between Kroner and pounds ( remember I had Chablis with my meal). After catching up on some student work and my cabin picnic I settled down to watch Sans Soleil by Chris Marker after which my whole life began to feel poetic – even the continuous sound of the ship’s engine in the night when I went up on deck for a cigarette. I slept soundly and now it is 8.45 ship’s time. We are due to dock in Harwich at noon – no, 1pm Danish time. 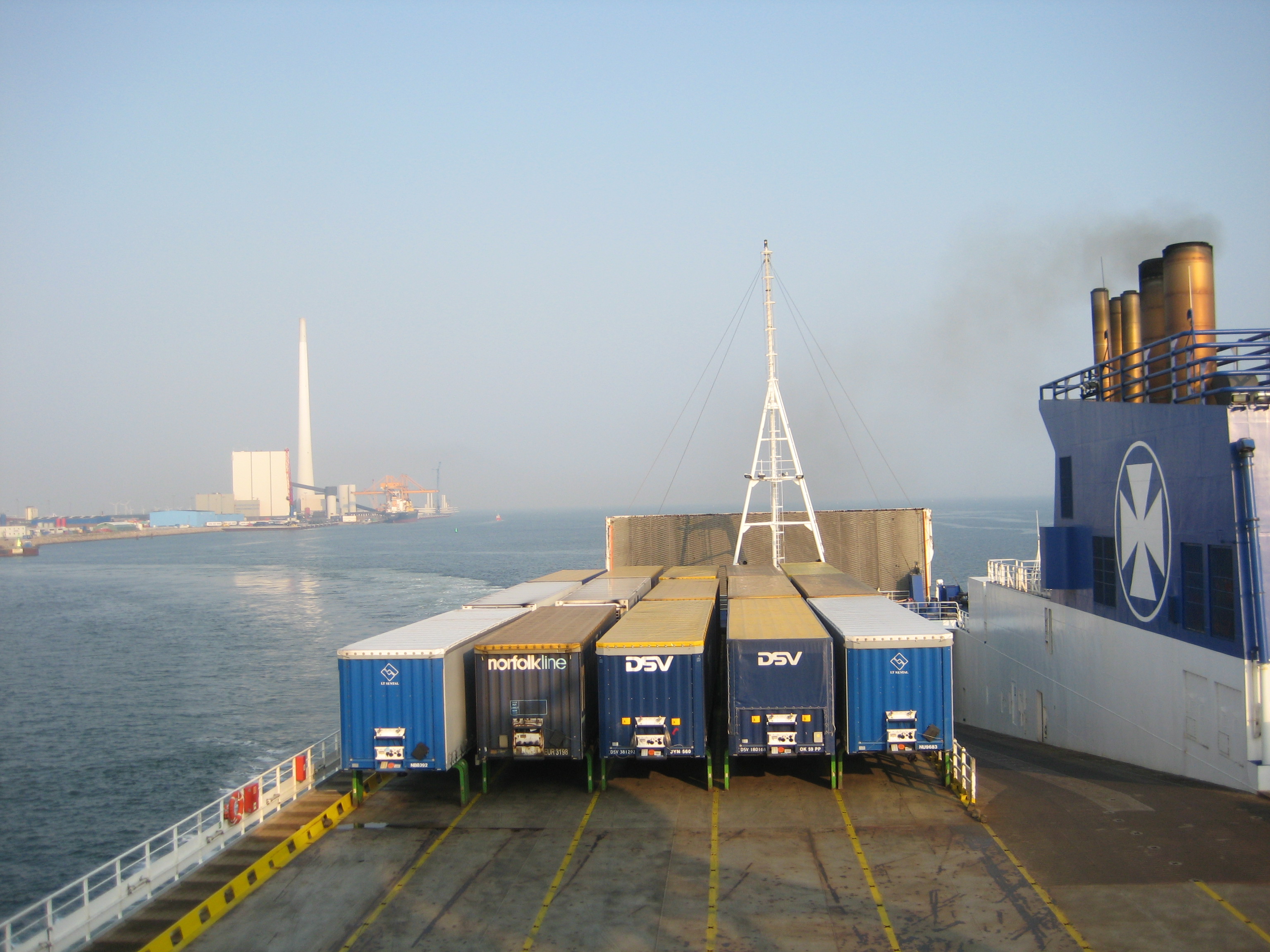 The journey from Odense to Esberg via a few detours was 88.8 miles; moving average 49mph, highest speed 91.5mph. 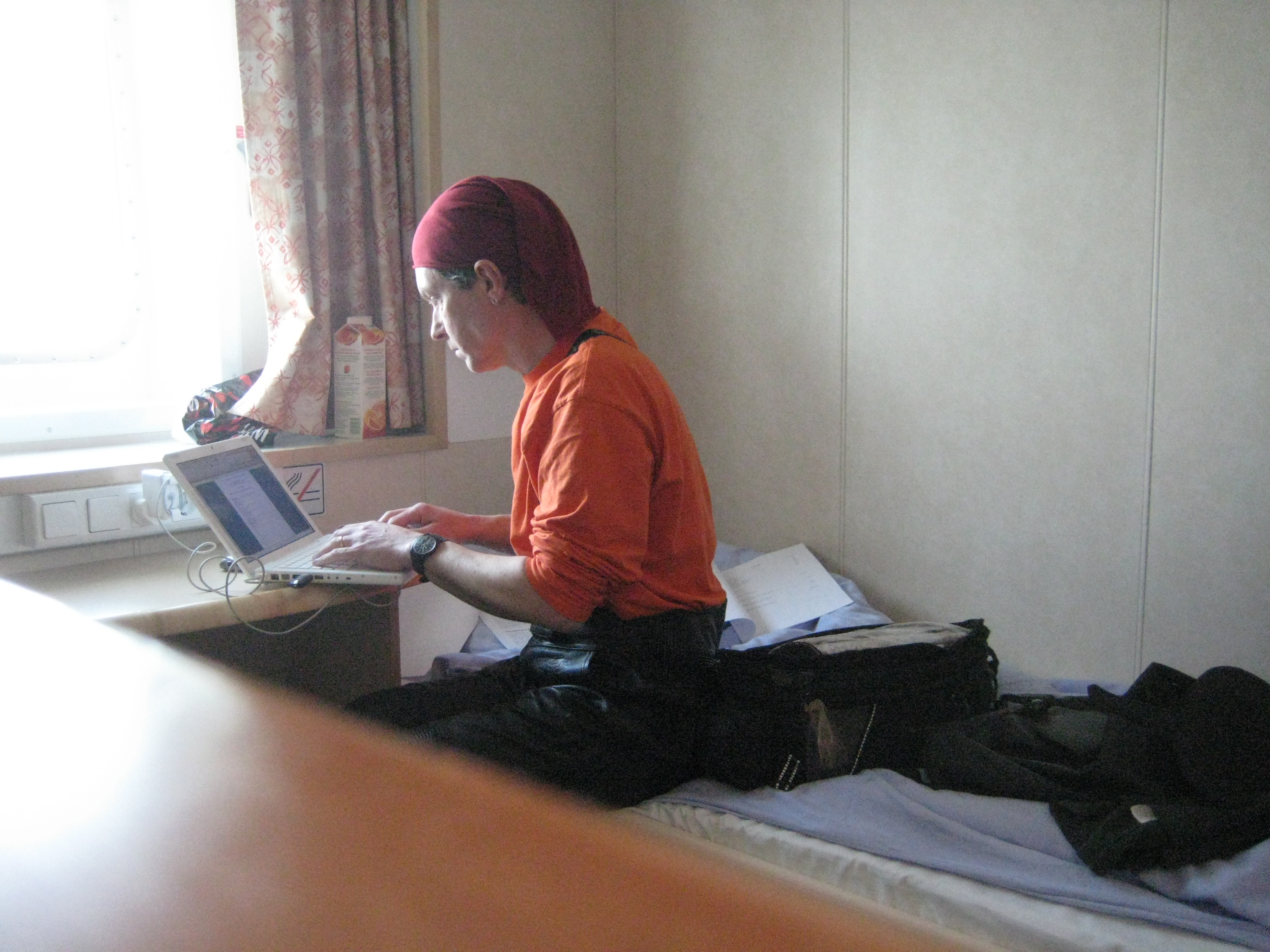 Hmm… not a good look. Luckily no one else was in the cabin

Marking some student work here for the last two hours has made me hugely grumpy, marking work for a ridiculous module that is just one more of nursing’s typical exercises in learning to express banal ideas in a convoluted and ultimately unenlightening framework and vocabulary. I feel so sorry for these students having to struggle to learn this pointless skill and how it humiliates them and does exactly the opposite to what higher education is capable of at its best. I need some fresh air on deck. I am obviously cabin crazy.

The journey home is an enjoyable ride through some beautiful essex and suffolk villages.