The best that can be said about this strange roadside diner on the way is that it was not part of a chain. One entire wall was decorated with local press clippings presumably of moments of local fame. The food consisted of bizarre help yourself salads in a fridge each covered in cling film. But the tea was hot and it was good to take stock. Apart from a family that came in, I was the only customer. I was starting to enjoy the ride (though I knew it could start raining at any time again) so I continued toward the south coast and looked through the fence at one campsite which reminded me of the previous one – lots of caravans – and decided to give it a miss and travel 20 miles further to look at another one in or near Solvesborg. Now this is choice! Why has it taken me so long to exercise it and to realise that if I am careful, I may not need to stay in these campsites that feel like a suburb of a small Dutch town? Half an hour later I arrived at somewhere very different. This was much nicer and felt like I had a genuine welcome from the man in charge. In fact it was their last night open for the season. This site was spread for about a mile along the sandy coast and had lots of pine trees and a view of the sea from nearly everywhere, accompanied by a strong wind. 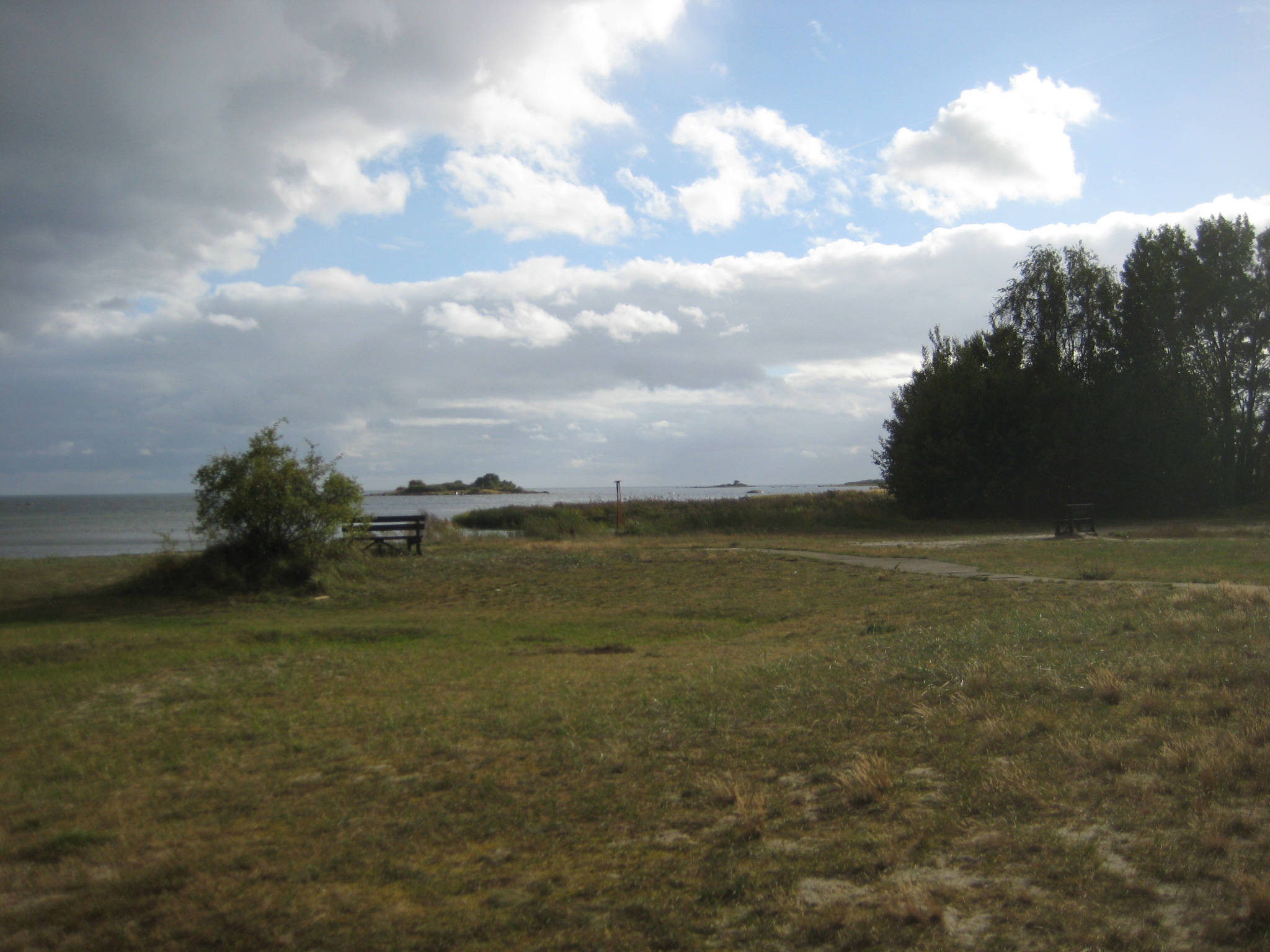 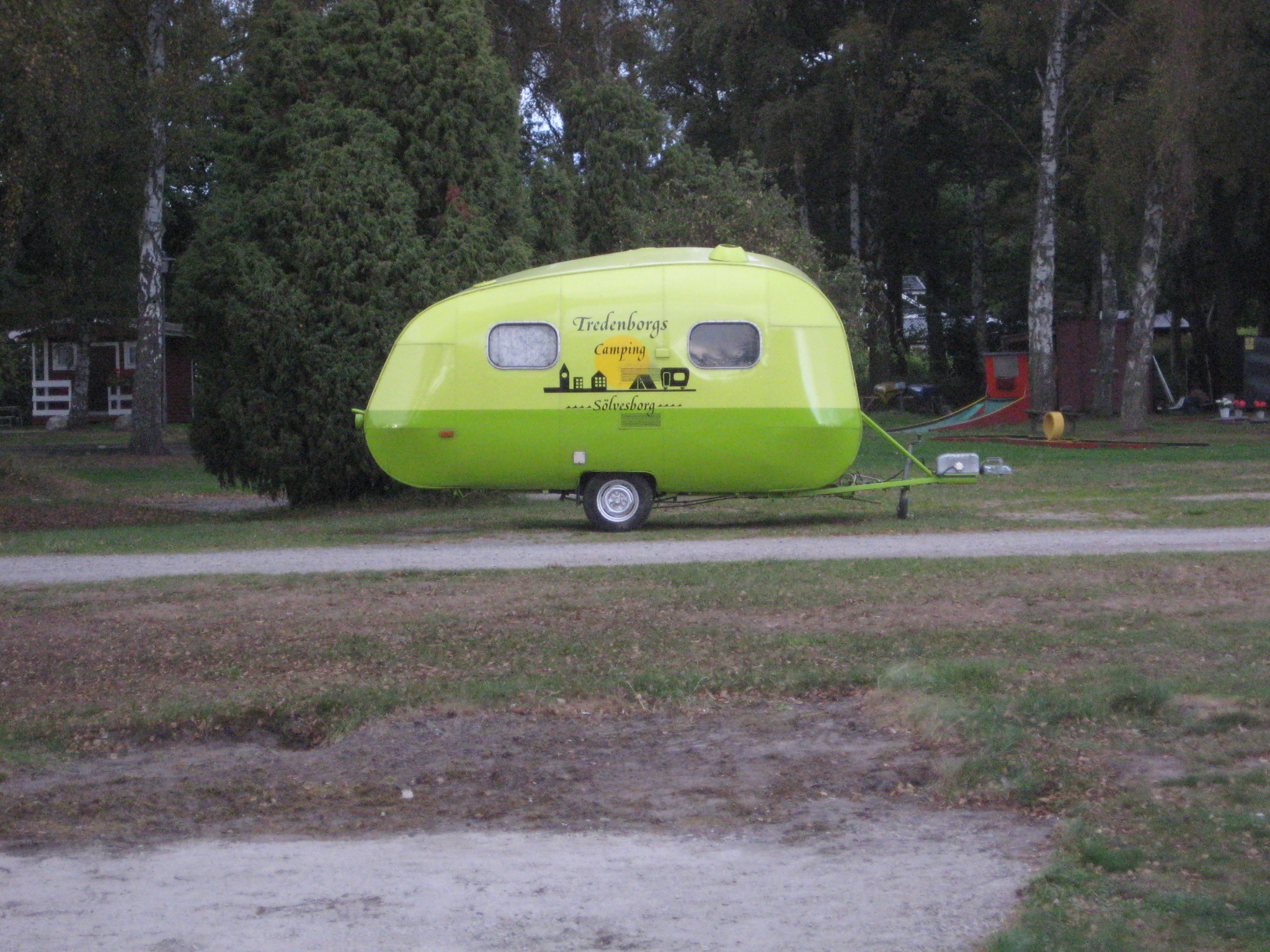 Perhaps because it was the end of the season it was pretty empty. My nearest neighbour in a caravan was about 100 yards away. It was dry but pretty chilly but a much more relaxing environment. I could almost have been tempted to stay but I had finished my book and the site was closing and in the morning it was cold and overcast, so I packed up and headed home.

On the way I stopped to have a look at Lund (Sweden’s version of Cambridge according to the guidebook) and it was a really nice, small town, where English seems to be spoken on the street, leaflets are in English and I had a great cappuccino and scone in a little cafe.

Then I headed back, not before some elderly Swedish man sucking on a pipe asked me, looking at my bike whether I had just returned from a round the world trip. No I said just Sweden and Denmark. Ah so its just the image you are after then, he replied. Ho ho. Riding over the Oresund bridge and tunnel was great fun and windy (and costs 23 Euro) and there is an even longer bridge between two of the Danish islands. As soon as I emerged in Denmark I noticed the sun was out and the temperature rose 5 degrees.

So I made it back to my lodging in Odense by 4pm. My first priority is to go and buy some real food (I’m ashamed to say I ate Travelunch dried meals in the evenings) and cook a proper supper here. With a bottle of nice wine. Ah home comforts.

I made it over the water to Sweden on the ferry from Helinsor to Helinsborg (I think I have that the right way round) after having a look around Denmark’s modern art and architecture gallery Louisiana. Its Scandinavian and Nordic buildings prepared me for moving over into a subtly different country.

On the boat was a wiry old German riding a GS100 which he said had taken him from the northern most tip of Norway to the very south of Sicily with over 100,000 k on the clock. He said he was attached to it and I can see why. He admired my rather newer and more shiny bike but I suddenly felt a bit ashamed of all the gizmos attached in the face of his highly appropriate workhorse. He said that he wasn’t strong enough any more to pick his bike up if he were to drop it. He was a real sweetie, off to stay with a friend in a cottage somewhere in Sweden. I don’t spend a lot of time with motorcyclists but these moments are gems.

The campsite I chose is just over the road from the sea and while the sun is still shining it is beautiful but there are some heavy clouds and they say tomorrow it will rain. My entry here did not get off to a good start. The helpful young guy opened the barrier to let me in but it is not set up for motorcycles and came crashing down on the back of my bike knocking me and the bike into an extremely solid and unfortunately placed metal signboard, sending me flying and bending the bar at the front of the bike that the windscreen is screwed to. A couple of Swedes came over and helped me, asking me if I was OK. It was very sweet and offering to lend me tools to fix it. After putting up the tent I got my trusty tool kit out and tried to straighten things up but to no avail. It should get me through the next few days. Luckily nothing more expensive was damaged. Someone staying here told me that the same thing nearly happened to a woman on a motorcycle yesterday but she just made it through.

This campsite has great wifi – which is some solace. It started raining that night and rained with possibly only a couple of short breaks for the whole next day and most of the next night. I felt forced to stay put and pay for an extra day. Despite not liking the site much (when will I learn to avoid these places that are crammed full of retired people in big white caravans and mobile homes?) I spent the day reading Hisham Matar’s Anatomy of a disappearance in the kitchen, the only warm place around. I must say the weather, the event with the barrier and the demographic of the site (not to mention an upset stomach) meant that my morale drained through my boots.

The usual night’s sleep and semi-sleep, waking at night with every movement of the ship magnified by the dark, my horizontal position and dreaminess, my heart in my mouth with every pitch and roll until I finally roll back to sleep. After a buffet breakfast for £12 there is only two hours till we dock. Out on the sundeck again I watch the back of the ship, the ramp we drove in on, now vertical, rise and fall against the sealine. The sky is patchy blue, auguring well for good weather for the journey to Odense.
There is not much to say about the passportless disembarkation and the ride on the boring E20 to get to Odense, other than that the hospital complex where I am staying is close to the exit of the motorway, my GPS led me to park exactly outside the door to this former old people’s home (according to Niels) where my room is up in the third floor attic. 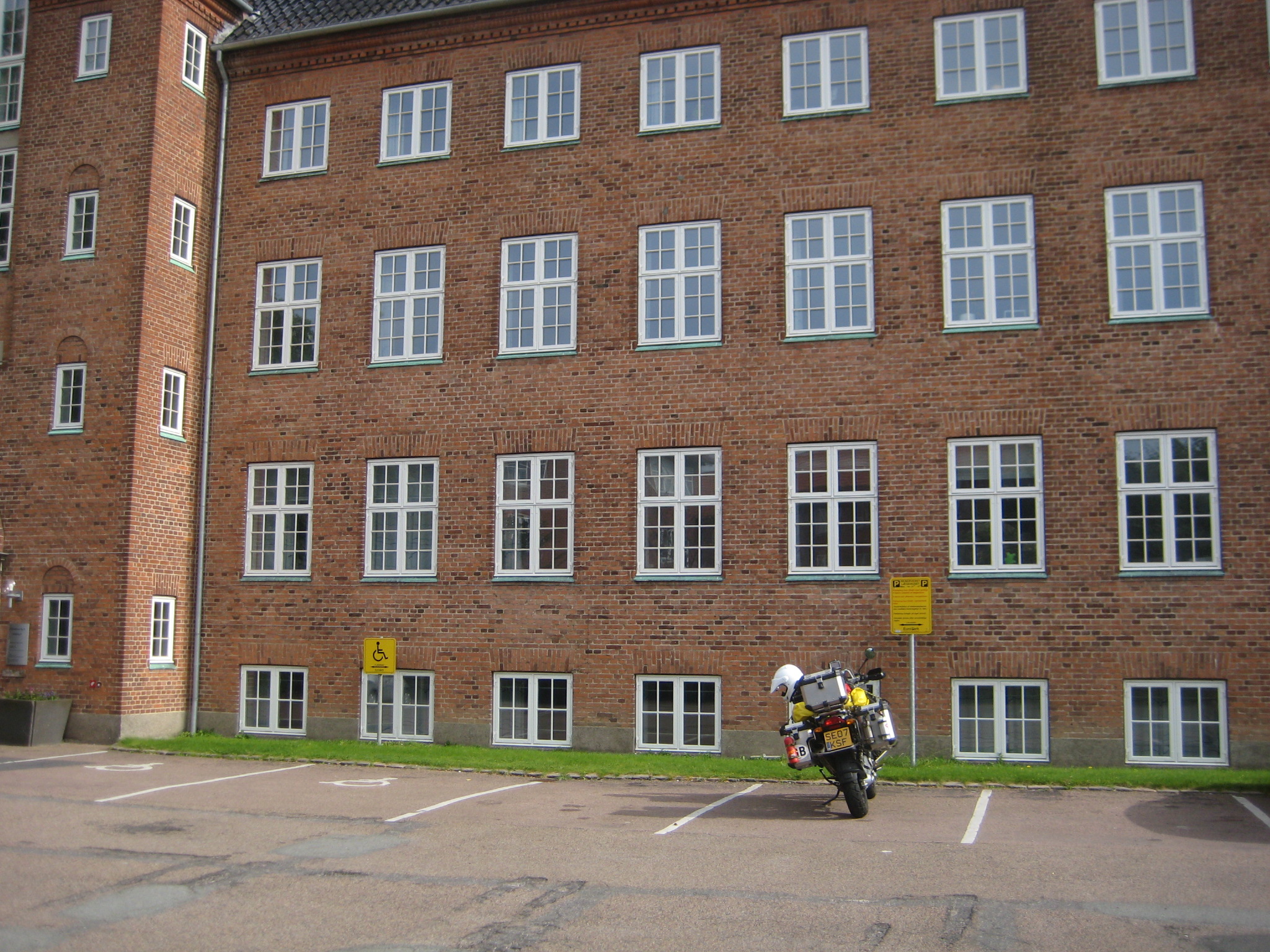 My motorcycling fantasy has come true in that I was able to ride straight into a building through wide opening doors, the large lockable brick bike shed where I can leave Bertha

Another trip, something to be looked forward to and prepared for, though this time a mixture of work – 5 weeks at the University of Southern Denmark in Odense – and 5 nights in Sweden camping plus whatever short travels I can fit in, later in the year than I would usually chose to travel with a tent. So with so much stuff- camping gear and proper clothes, laptop and text books – the bike is really loaded down with a mountain of stuff but not that difficult to get used to in the end. 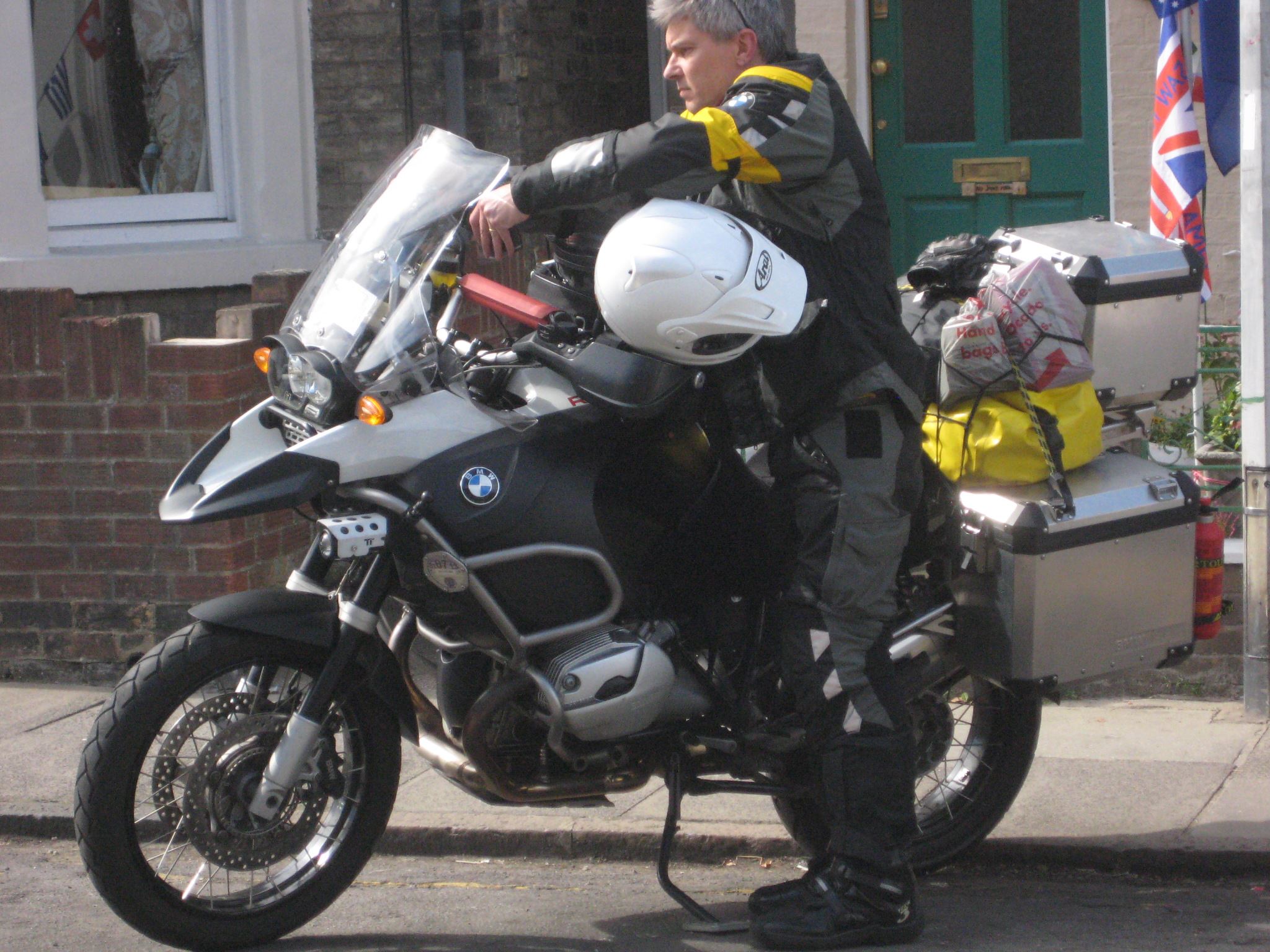 Stopping at the first set of traffic lights is the most wobbly part. The journey through three counties to Harwich is as enjoyable as ever, a nice route through beautiful villages, and blessed with warm sunshine right into the evening as the boat sails off. There are only about 6 bikes on this crossing, a couple of beautiful red Ducati Multistrada among them, one with expensive panniers held together with silver gaffer tape after its owner lost the key and had to break them open, a Ninja owner who told me he watched on CCTV footage his bike blowing over in the wind in his work carpark and suffering hundreds of pounds of damage. Riding on to the boat up the ramps is always fun but strapping the bikes down seems hit and miss. Some crews really help others not at all, no advice today so it’s a struggle to get their old straps to work and we are there on the car deck long after the motorists have gone. 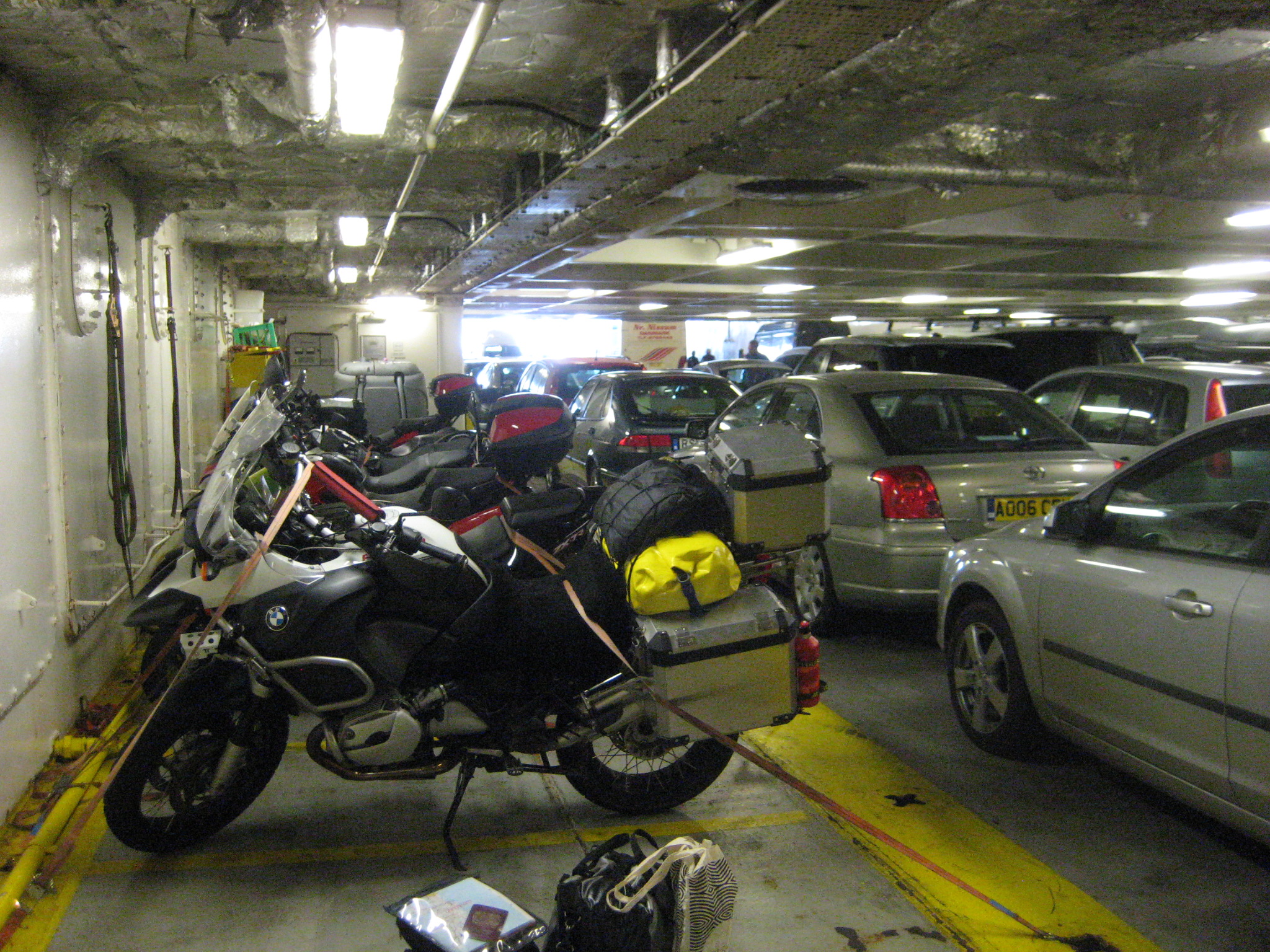 The cabin is the same as usual and always my irrational fear that suddenly someone else will burst in and I find out I will have to share it.

Up on the sundeck as we pull out of Harwich slowly at first then gather speed and the boat lists as we turn to the south coming out of the estuary and then east again as the boat points out to sea. With theses changes of direction car alarms sound below, despite the many requests to turn them off. There are only a couple of dozen people here on the deck. There’s an end of season feel. But the sky is beautiful as we look toward the sun as we leave the Suffolk coast behind. I realise I’ve been looking at the sea for 45 minutes. It takes these trips just to get into a slightly different kind of space.

I think this is my seventh motorcycle trip. I feel a bit bemused about that. I was the one with reassuring information in the queue of bikers earlier. Since I started all this, I have a bigger bike, innumerable gadgets and lots more grey hair.