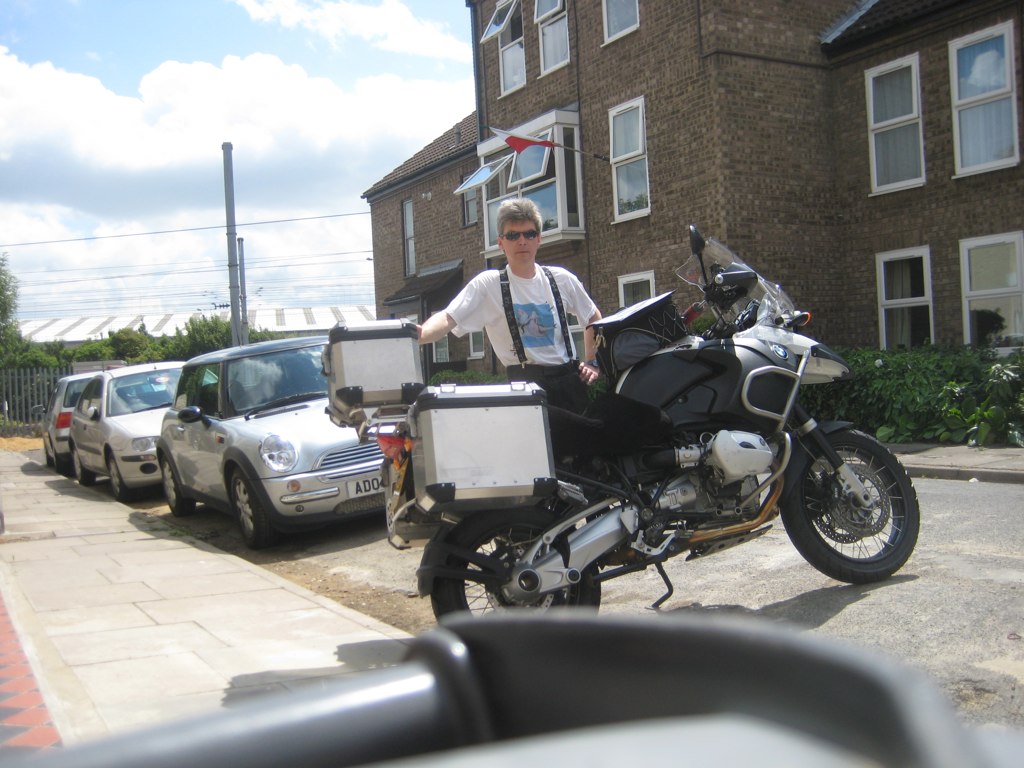 I can’t quite believe that after about 9 months of anticipation and planning and gathering those last pieces of kit and gadgetry, that in a week’s time I will be sitting in Portsmouth with the Santander ferry leaving the next morning. I’ve been downloading and printing maps I’ll need and copying the last documents. Putting in ‘Portsmouth Travel Lodge’ (where I will be staying) into Google unfortunately brings up a barage of complaint about this hotel. The most enthusiastic say that it is what you’d expect from a budget place. But the strong theme is dirt, followed closely by delapidation. Another popular theme is constant noise. So I am prepared for a grubby sleepless night in an uncomfortable and probably broken bed – in other words a good preparation for two weeks camping. As long as Bertha is still there in the morning with all her bits then I won’t be complaining. Speaking of Bertha, she now has a year’s MOT and a new front tyre. I’m hoping to feel totally comfortable on her by the time I get back. I will be visiting Lourdes, seeking out the shrine devoted to leg-lengthening. Another two inches on my inside leg would make riding a 1200gs so much easier.

Tonight I’m staying the the Travel Lodge about 200 yards away from the entrance to the Brittany Ferry terminal where I catch the ferry in the morning.

The reviews on trip advisor said this place is dirty and falling to bits but I find it completely satisfactory, certainly not lavish but perfectly adequate and unannoying. I’ve discovered Portsmouth’s answer to Camrbidge’s Mill Road and stocked up on food for breakfast and for the ferry – including six or some other unnaturally large number of custard donuts. I’m Reading Bruges La Morte, cutting off slices of Dutch Gauda drinking Australian Merlot (which according to J F Lyotard makes me typically postmodern) and watching out of the window as more people on bikes arrive. There are five now. There is very little hair among the riders. I’ve often noticed this.

Same place this morning a fierce sun beats into the room and I have the curtains nearly closed with just a shaft of sunlight shining in. The car park and adjoining pub filled up last night with bikes and bikers but they nearly all left early at about 6am – it woke me up. So now just three of us are in solitary splendor probably awaiting the same sailing. It will be nice to be on the breezy sea today instead of riding through hot streets.

On the boat: We’ve been sailing for nearly three hours. There must be 100 bikes down on the deck, crammed in and tied down. If one were to fall, they would all go down. I don’t know how we will get them all out. We sailed out past the sea-line of Portsmouth, beautiful town in the sunlight with its renovated docks and victorian buildings.

I must come back to visit some time. I wondered about the person who drives this huge vehicle and how old-fashionedly manly sea captains are, with their silver buttons and Aran polo necks. Perhaps I am thinking of Jack Hawkins films. I stood on the deck at the back with a large H on the ground for a helicopter to land on and started to feel myself move into a different space, with 24 hours on this boat with nothing to be done, not even a companion to interact with. I am savouring the slow passing of solitary time.

The ship has a French flag and all the staff greet you in French then very quickly, inevitably, switch to English but they never abandon their own tongue – why should they?. The boat caters for all comers – the endless bars with loud Brits with nearly empty pints of lager in their fists even before I had climbed up from the car deck, and the spaces for the older traveler whose features are bleached of colour. So far I’ve alternated between time on the bracing deck and my cosy though windowless cabin. After seeing the coastline become distant I came down here to read a little more of Bruges La Morte then fell asleep. When I woke up and went on deck an erie transformation had occurred: we were surrounded by fog and the sea had lost its sparkle. The ship’s horn sounded every few minutes, ominously as in so many disaster at sea feature films (some perhaps with Jack Hawkins not showing a trace of emotion as women and children leave first on the floundering life boats and the horn sounds again). The trick will be as usual to take advantages of the ship’s hospitality while avoiding the annoying and loud fellow-traveler and of course to avoid icebergs and German U-boats, and those little two-seaters that frogmen ride in dark and echoey waters to stick magnetic limpet mines to the side of our hull and give them one big wind of their clockwork timer before they speed away, under the impetus of two quiet propellers. I had one of those as a boy that I played with in the bath. The frogmen were detachable and had a life of their own, of sorts.

After a sound night’s sleep we are less than one hour away from Santander (the port not the Building Society). I wonder with so many motorcyclists on the boat how long it will take to fan out and be riding alone. I’m stocked up with water. It will be about 145 miles ride today to the first campsite I’ve chosen. Lets see how well I can keep to the route.

I made it to Camping Eratzu, the first site of this trip. I’m writing in the cool reception area of the campsite where I’ve just grabbed on to the campsite’s wifi by the skin of my digital teeth. What a great language Spanish is, it almost has two versions, one spoken by men and one spoken by women. It was hot today and once I arrived here and found myself in front of a mirror in the hygiene block I noticed that I resembled Mr Tomato Head. Speaking of tomatoes, I made the classic mistake akin to the linguists’ ‘False friends’: I bought what looked like a tin of tomatoes to have with my pasta which I plan to cook in a little while only to find pimentos inside. 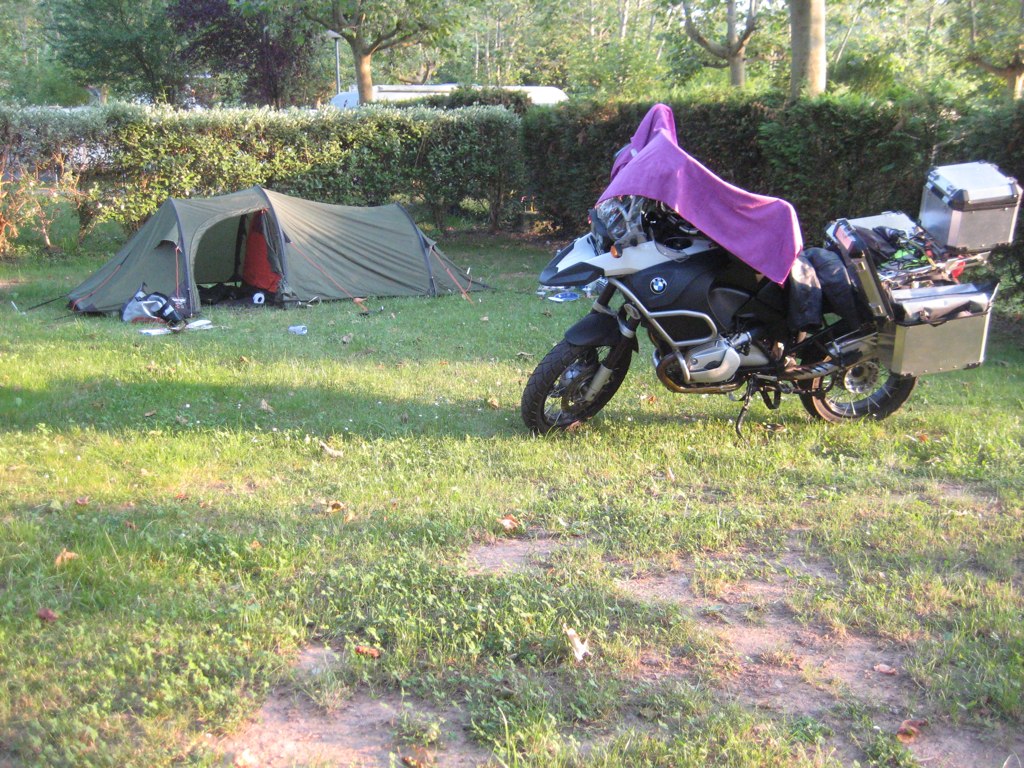 France is just about a mile down the road. Tomorrow I’ve plotted the 110 mile ride to Lourdes on the nice roads for a change. Today, when I rode off the boat, I abandoned myself to Emily the GPS voice and spent most of today on fast if dull motorways. The hundreds of other motorcyclists on the boat did indeed disappear pretty quickly as they fanned out from the port. As I rode at different times today I smelt, cooking meat, farmyard smells, cigar smoke and brewing coffee.

Oh what a day. I’m writing sitting cross legged in my tend in the rain and thunder just outside Lourdes. 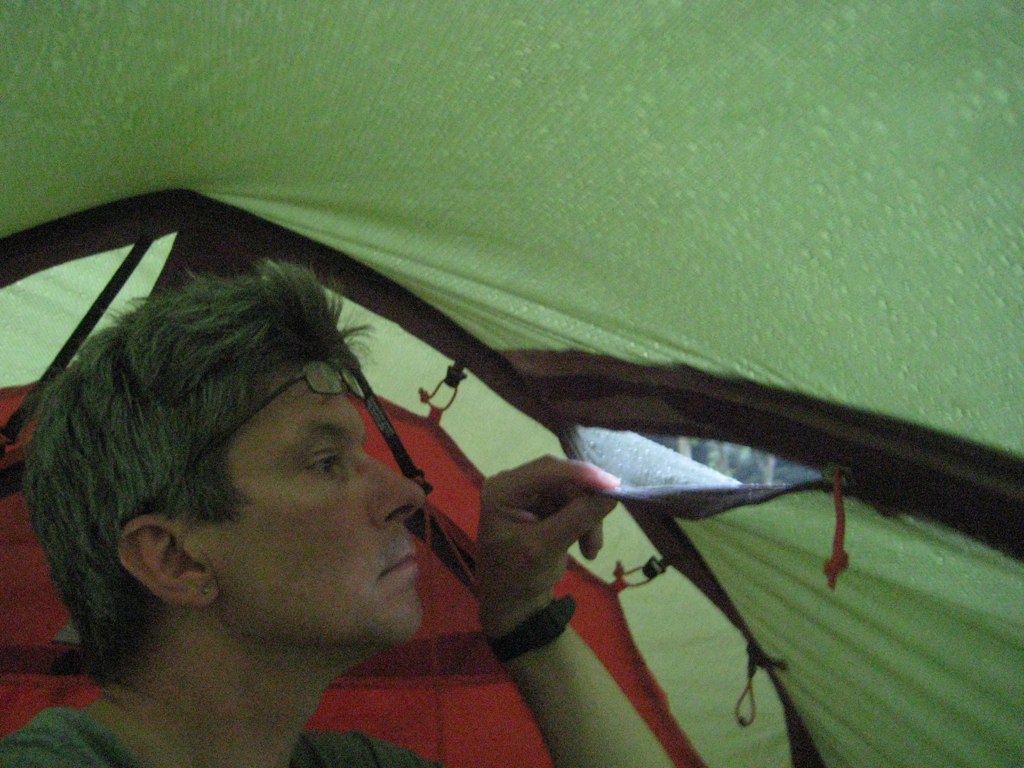 How lovely it would be if the rain would stop and the skies would brighten – but they say every season is a good season. 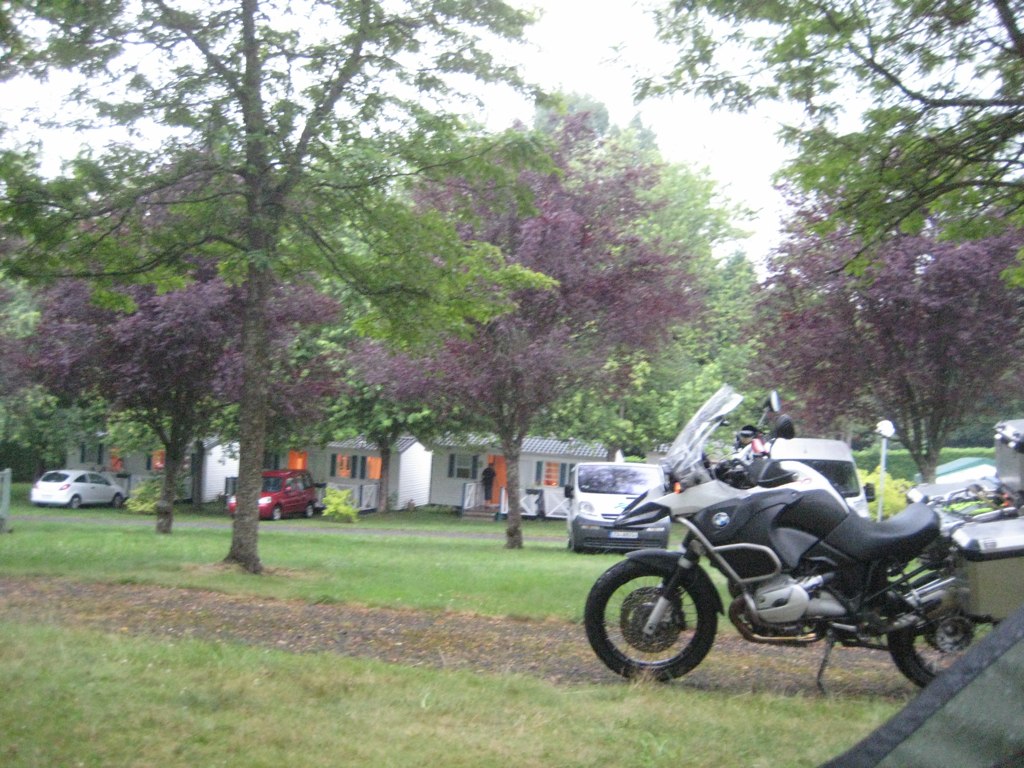 I started today’s ride with a kind of baptism of fire, climbing up hairpin bends on the mountains scared I would run out of road and running wide onto the other side of the road. Thank goodness there was no oncoming traffic. There were the usual periods of getting lost and trying desperately to heave the bike upright when I parked on an incline that all added to a hot and stressful day (for some reason I hadn’t found the technique for doing this by then). The colour printed copies of my passport and other documents that I’ve been wearing around my neck have smudged and run with the perspiration. I mistimed today and arrived at Lourdes around 3.30pm, exhausted and hot. I was too tired to heave my heavy jacket (before I had bought my BMW Ralleye Pro which is not quite so hot) and helmet around hot Lourdes so I had a quick cappuccino instead. I’m glad I can speak a little French – much more than my three words of Spanish. Here’s the BVM: 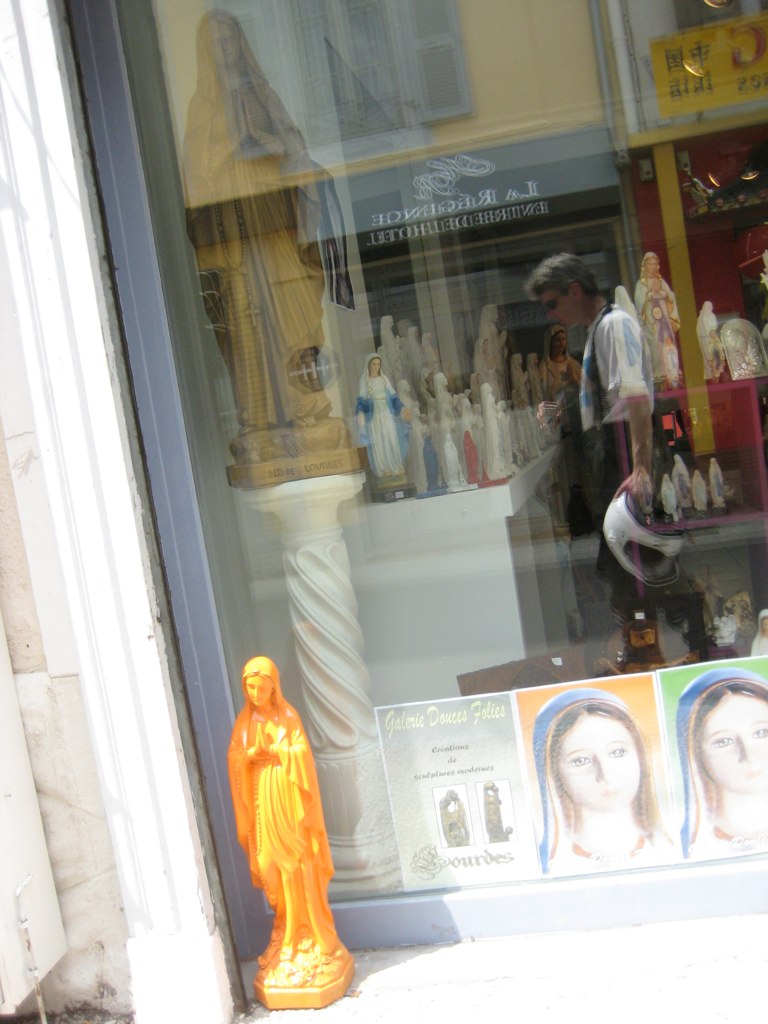 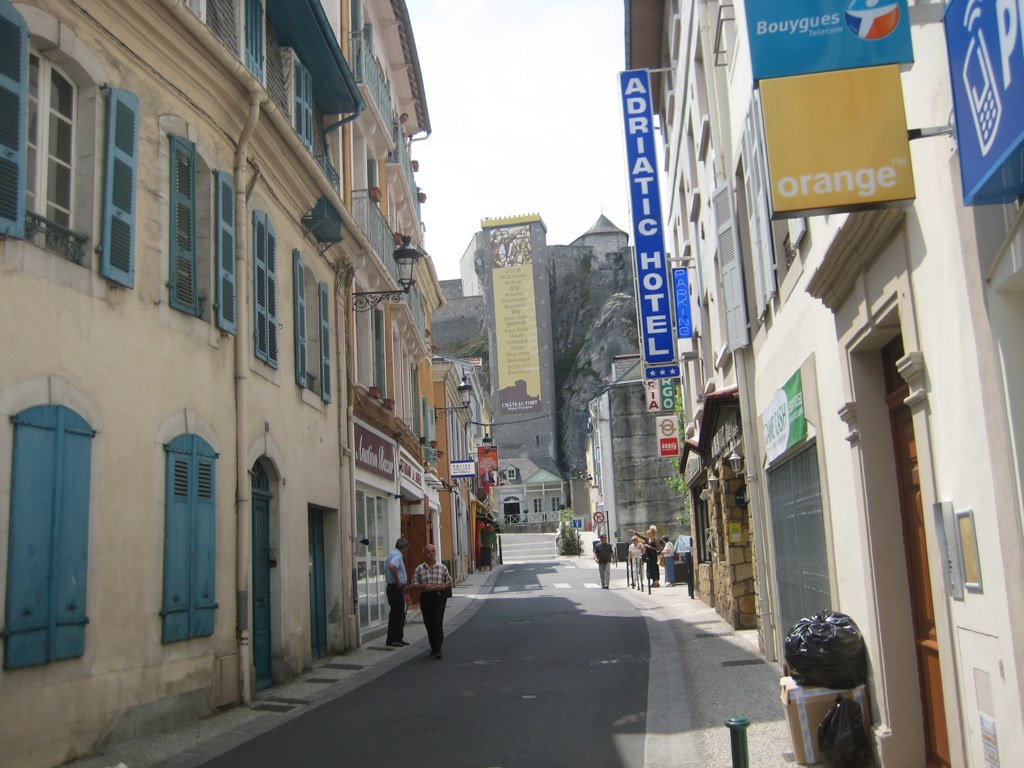 Today’s trip to Lourdes took so long that I abandoned the next 80 miles I planned to ride to the next campsite and decided to stop instead just outside of the town. Once I had set up camp and chatted to a Brit who is a veteran biker I showered and bought some food to make supper, but then it started to thunder and rain. After a few glasses of wine crouched in my tent I noticed how cold I was and realised that the rain had been flowing in a river from one side of my vestibule to another and I was sitting in it. So Ive been eating slices of salami and drinking white wine from the bottle (I think my metal cup is outside somewhere). I’ve been trying to decide whether I am having fun or whether I am miserable. I know it just needs the sun to shine and my spirits will lift but then I decided that I would not go to Lourdes for a miracle, for that one thing that will make everything better. I am wondering how I will cope if it rains all night and all day. I suppose I will put on my waterproof gear and stay in hotels. Its not the holiday I had in mind. (This goes through my mind during the rainy hours of every holiday I go on.)

For some reason something that I heard about Scott and Amundsen and have never been able to forget comes to mind. But I have not followed the thought through until now. It is said that one key difference between the approach of the British Scott and his team and the Norwegian Amundsen in their plan to reach the south pole was that for Amundsen the trip was a matter of technical preparedness while for Scott it was about moral readiness. I had always scoffed at Scott’s post-Victorian typically British approach when I thought about this and the fact that Amundsen made it and not Scott and his team seems to prove the point. There are fewer ponies and dogs on this trip and the only ice I encounter is in a drink if I am really lucky but I think it could be true that I have not thought much about the moral strength needed even for a relatively easy ride around the tarmac of Europe. I have certainly prepared myself technically (I’ve spent about 10 months planning and gathering kit) but the solitary travelling while rarely being alone is something I anticipated but didn’t think enough about.