The first piece of sunny weather and it was an opportunity to get back on the bike since before Christmas. Also an opportunity to test a new helmet cam, the Sony FDR-x3000. Its hugely better than the Contour Roam (Contour seem to have brought out a new camera – I thought they went out of business): it has better resolution and takes much nicer looking footage, is smaller, has a much better mounting system and I can plug a helmet mic directly into it. Probably the best feature is the remote controller with a small screen that mounts on the handlebars and saves feeling around in a gloved hand for an on switch somewhere on the side of my helmet. It was a test run so all didn’t go entirely to plan.

After reading brief recommendation I headed down to Box Hill in Surrey, just the other side of the M25 (which if you walk around I have heard you get a tour of London’s old asylums at a safe distance from the capital). I should have done more research because my webpage did not mention probably the main draw for motorcyclists which is the Ryker Cafe, run ‘by bikers for bikers’.

As said before, riding out of London in any direction involves many miles of driving through congested roads and then unattractive dual carriageway before getting to anything remotely rural. This time my journey passed nearly every Northern Line station going south towards Morden. But the more I do it, and the more familiar the route gets, the less I notice it and the quicker the journey feels.

The camera worked well, though just when I got to the picturesque, the never-ending circle of dots on the remote screen told me that the camera had already used its battery – of course I had a couple of spare with me. So I have fantastic footage of various tube stations in south London. Not having really looked hard in enough in advance I stopped at the worst possible establishment (there was a last space in the crowded car park), called Smith and Weston for an orange juice and a chance to search on Google for why my GPS was not working properly (clean the contacts someone wrote, even though they look clean – which I did and found it worked). My route out of there led me past two much more interesting looking stopping places, down through a couple of hairpins, and past Ryker’s Cafe with a carpark heaving with motorcycles of various styles.

The camera saves GPS data which I think you can only embed and render onto the footage using Sony’s movie making software which, apart from being able to do that, is not very good. Solution: save the file then import that into FCP to properly edit and the speed and other data remains on the screen.

The whole trip was just over 50 miles and was a lovely way to spend the first Spring-like day and the first riding day of 2019. Wimbledon was strangely deserted. Here’s a screenshot of the route.

Here’s the GPS track, strangely just for one direction (not the band):

Here’s the footage I took:

The MCN Carol Nash-sponsored motorcycle show at the Excel Centre in February comes as something to slightly brighten up a month that does not have much going for it. Even getting over there involves travelling on the still-a-novelty-to-me DLR, though I am gradually realising how well-placed London Bridge, where I live, is, certainly for travelling in an easterly direction.

I usually have some mixed feelings though. It is fun to sit on the amazing bikes and drink in their shiny beauty but sometimes motorcyclists in large numbers can make me feel alienated. One trick, that I learnt this time, is to arrive early because an hour or so after opening, the place is heaving. Was it my imagination or did everyone make a beeline, as soon as the shutters were raised, to one bike in the show, the new BMW R1250GS Adventure, sitting there in its mighty rally colours and golden wheels and black hubs. 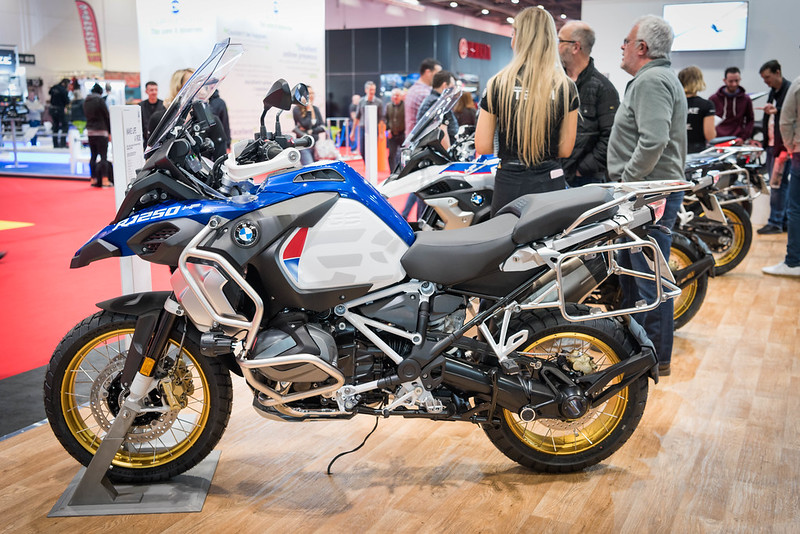 And this one was fitted with a lovely Akrapovic can. 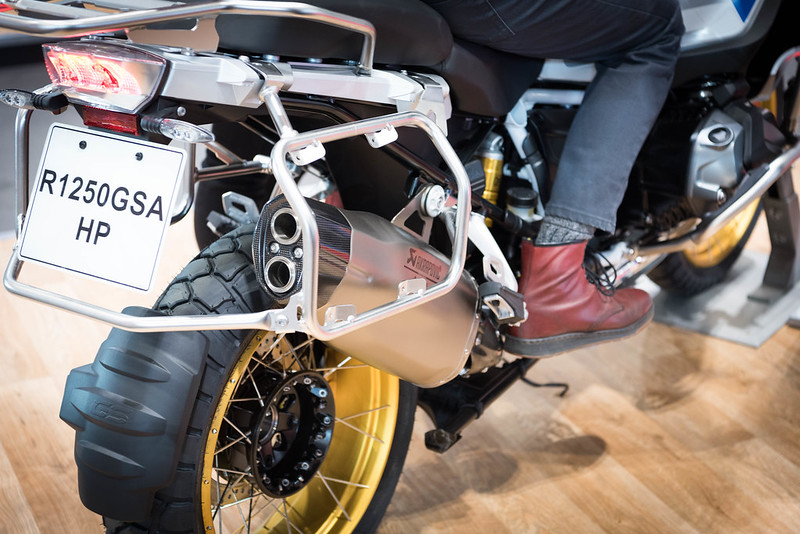 Not to mention the new fancy TFT highly coloured display where ordinary old bikes have a couple of dials with needles. Once on it, though, it was a case of tiptoes and memories of my years with the old-old version of this bike came back vividly as a kind of muscle memory: very hard to paddle it anywhere not just because of its weight but because of this height (should you be the kind of motorcyclist who needs to do that – backing into a parking space for instance).

On a nearby stand sat another model of the same bike and it was ignored by all (the paint finish was a little boring). Climbing on that was a completely different experience because, as the label confirms, it has a lowered seat and factory low suspension – extra cost £180 but would be worth it if I was in the market for this bike. 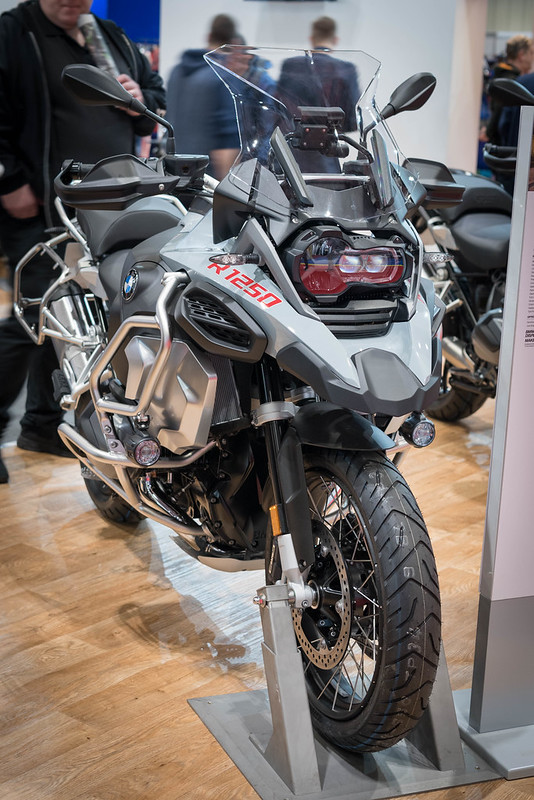 As I overheard someone say on the way in, the show can be overwhelming. Highlights for me, apart from the BMW stand, were brief visits to the Triumph (I used to have one), KTM (their bikes still look weird in an age of increasingly standardised looks) and Ducati (because their bikes look so beautiful, especially, of course, in red and are ridiculously fast).

But back to earth, my first purchase, and human contact, was at the EDZ stand, where I bought a merino wool base layer and discussed the care of woollen fabrics. Then there was the Michelin Adventure Stage with a schedule of interviews with the famous and not so famous. I wondered by first then spotted, sitting at a desk nearby, the unmistakable Ted Simon. Here is a link to his anticipation of the show. I made conversation with him. This is the second time I have met him. He seemed rather bemused by my attempts at conversation – I said I hoped he would not get bored sitting there for three days and he said he would because he had nearly finished reading his novel which he told me about and which I have completely forgotten detail of author and title. For some reason, perhaps knowing his German heritage, I recommended Gitta Sereny’s book about Albert Speer which I am reading and he seemed slightly interested, certainly remembering that Speer had spent time in Spandau after the Nuremberg trials. I told him that meeting him had made my day – which also seemed to bemuse him. After I had walked away I wished I had asked if I could take a photograph of him and I wished I had mentioned that we both had German mothers. But perhaps there was no call for that kind of assumption of a kind of familiarity.

Returning to a bench on the Michelin Adventure Stage, more to take off some hot layers, I was engaged by a couple of speakers talking about the benefits of riding trails alone and of riding in the moonlight and on small bikes. I was transfixed by the session on tyres and how to fix a puncture, with the technician from Michelin driving a nail through some new looking knobbly tyres on the presenter’s well-weathered round-the-world V Strom (I think) up on the stage. I realised by the end of it that I need to get a new tyre, as my ‘temporary’ repair from a few months back shouldn’t be relied on. And I will buy one of these repair kits. I found myself actually engaged and engrossed in a way I didn’t remember before at this show. When I left I wished I had been able to stay longer.