I had wanted to achieve a major life synchronisation, the details of which I won’t go into now, save to say it might have involved a relocation, the building of a new, proper workshop and giving up working for a living. The other ingredient was buying a new, lighter motorcycle than the BMWs that I have owned and ridden on a range of journeys for the last 12 years. Once I decided to decouple, or rather syncopate these life events, I found the new bike and bought one pretty quickly. The relocation and the proper workshop will have to wait.

I spent probably nearly a year deciding on a small ‘dual sport’ light-weight off-road based bike and settled on the light and powerful KTM 690 Enduro. I’d sat on one at a bike show in Birmingham (the last one before lockdown). I found it tall but I was willing to take on the challenge and embark on the many mods to get it adventure ready. The bike has a fan base, many in Australia and the United States, and a huge amount of modifications from more comfy seats to larger fuel tanks are out there just waiting to be bought. But one video from Bulgarian travelling moto Vlogger Pavlin of the 690 and his uncompromising verdict that this was no way an adventure, or travel bike, suddenly made me realise this would be a mistake to trade in my capable Beamer for such a little thumping number, even though it had proved itself capable of making it from London to Sydney. Enter the bigger but not too much bigger , a mid sized twin cylinder bike. I also sat on this in Birmingham in 2019 and remember how comfortable and comforting it felt after perching on the high enduro bikes that I had been interested in.

I do have rather a lump in the throat for my BMW years and the familiar feeling of the comfortable seat and view over the instruments, the clever way the GPS integrates into the bike’s brain…

Here is my new KTM, in Cambridge, just back from buying it :

and outside the house here in London where I will work on it for a week or so before heading back:

I’ve only ridden it twice. The first time was the lovely route from Ipswich where I bought it, through Suffolk, Long Melford and Clare to Cambridge which was great fun. The second was from Cambridge to London to do some work on it – which was OK, though the approach to London is not that enjoyable and I somehow lost the A10 without a GPS. It is a very different ride to the BMW, much more involving, noisier. Its lighter weight (its meant to be about 190kgs compared with around 250kgs of the R1200GS) puts it the other side of a border between hefty and almost unmanageable to easy to move around, to lean up against a wall and to get on and off with the sidestand up – result.

Priorities for travelling – and 6 nights under canvas in the north of England are a few weeks away – are installing a GPS and some kind of luggage. I have a new Garmin Zumo XT ( 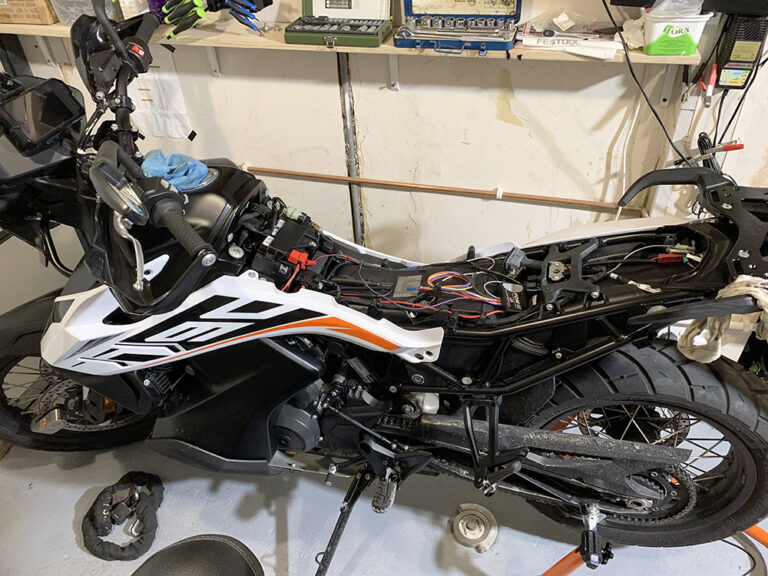 Luggage is not so easy. Mosko Moto have run out of almost everything so I will improvise for my first trip.