Today has been quite a day. Sixty miles, 2 and a half hours riding, down to seaside town Ribadesella and back. That sounds very simple, and my time sitting by the harbour on a bench in the shade was lovely, eating custard donuts bought from the supermarket there. On the way there and back was not so much fun. 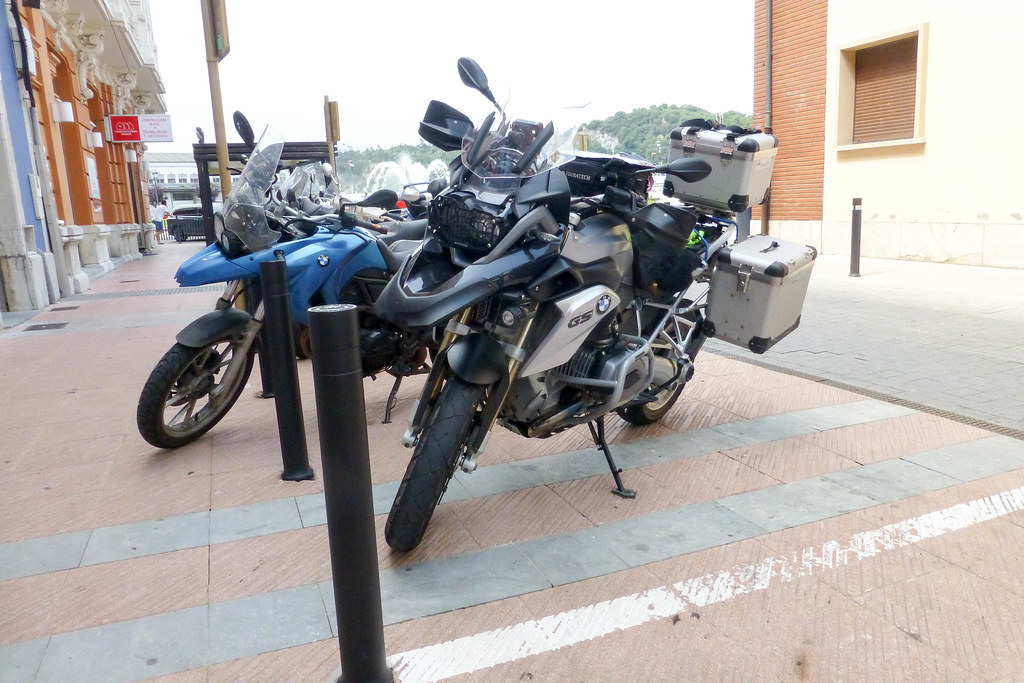 On the way there, determined not to get lost I ended up following the GPS’s mad instructions – I’ve just looked at the track and it is one large ragged circle with no apparent sense to it.

There is an air of mystery to the hotel this evening. It is an old, very old manor house, with deeply worn stone steps and heavy doorways. Painted ochre on the outside. There is a main door, made of dark oak, at the front and another from the bar to the terrace at the back – and finally a service entry at the side. But I have just finished a slow glass of wine outside on the terrace, reading, and now all the doors are locked and I can’t get back in. Earlier I saw three women walking around the outside, some way off. I could hear that they were not speaking Spanish. They all had exactly identical figures. I walk all the way round the building. I look down the well.

And on the way back from my trip to the coast, I was sure I knew the way. I wrote the name of the turn off from the main road in pencil on the blue sea part of the map in my tank bag. But I missed it. So I took the next turning and knew where I was going, over the level crossing, past the station. But then somehow I was lost again and the GPS was pointing me in the completely wrong direction. Why does it do that? So I just stopped and turned the bike around to retrace my steps. Eventually I saw the signpost toward the hotel and followed it, still focussed on the frustration and need to find the right route. And then from around a corner, in a small lane with tall vegetation on both sides comes a car. And I am on the wrong side of the road. We are neither of us moving very fast but we are heading toward each other. There is not time to turn the bars. But there is time to move the bike over with my legs and we just miss probably by 6-8 inches. As I sail on I can see that the car has come to a halt right up against the tall grass. With my last glimpse in the mirror I can see it start to move off. This was a near miss.

On the way out this morning I followed the GPS instructions to go down the branching spider-web of smaller and smaller tracks, always on the incline and mostly through farms. But eventually, there comes a point where carrying on up a tight hairpin up a steep track into nowhere is not possible. I stop and there is a few feet of grassy track but it is sloping downward and each time I try to stop the bike and put down the stand we roll forward and I nearly drop it two or three times. Eventually I work out the best strategy and end up with the panniers jammed up against the side of a stone building then drag it forward enough to climb back on, start up the engine and make the turn, back over the track and eventually onto tarmac. Never again. I’ve decided that big bikes and small tracks do not mix well.

I just have to get out of here in the morning – without getting lost. Its 3 miles to the main road and a petrol station as the fist step of my rather mammoth 450k ride eastwards tomorrow.

This issue of Adventure Bike Rider has a few articles on riding alone and loneliness. The first is a rather eloquent account of Ben Owen’s ride through the ‘vast wilderness’ of British Columbia. He starts with the words of a friend who asked, uncomprehending, whether it is ‘a bit shit’ to travel alone. By the time he had reached British Columbia he already had ridden for two months in North America so this was a big trip, at least by my standards. The article chronicles the ups and downs of mood as he mostly travels alone through tough terrain and terrible weather. At times he is asking himself why he is doing this and occasionally a flash of landscape or a sudden achievement put the doubts at bay – for brief moments. It reminded me of similar honest moments in Ted Simon’s writing and of course of my own brief and usually unadventurous motorcycle trips. My trips are unadventurous in that they have not left Europe so far and mostly take place on tarmac but there are plenty of opportunities for anxiety and self-doubt particularly when the weather is bad and I get hopelessly lost. So this kind of writing speaks to me – much more than the matey accounts of trips with ‘grins’ and beers with a bunch of riders. Turn over the page and you get a column by chartered counseling psychologist Doctor Harriet Garrod who is currently taking referrals and charges between £250 and £400 for assessments. She says you need to mentally prepare yourself for going solo. One of her tips is to try imagining what everyone is doing back at home if you are tempted to head back early (as I have done at times). There isn’t a mention that some people may be temperamentally more suited to being on their own than others, strangely. I speak as someone who is at the end, the introvert end, of the Myers Brigs Introvert-Extrovert scale. Turn the page again and we get a less than gripping, but rather sad, account of a solo rider who found he wasn’t enjoying his 50th birthday treat of riding home to the UK from central Europe. He hated it so much that he rode home from the Adriatic in one go – 1400 miles in 25 hours. ‘The opportunity I’d created to celebrate my 50 years of life was tearing me apart: I sat next to the bike in some random European service station and cried’. Initially I was a bit dismissive of this article but this disappointment is quite touching. Perhaps he didn’t know himself well enough before he set himself this challenge. Someone said to me ‘don’t expect enjoyment, think of the journey as travelling not as a holiday’. I’ve found setting a target helps, getting to the top of Scotland, or Norway, getting to Slovakia. Then you aren’t looking for enjoyment.

I’m at Geoff’s appartment in Les Gets after 195 miles of easy riding. I remember arriving before he arrived and picking up the key from a secret place.

Maybe that’s what I need – a network of flats and friends over Europe. That would make much more sense than the endless riding from campsite to campsite. I need to work on it.

July 4th (Sunday)
I’m writing from a small French town in sight of the beginning of the Alps which rise huge and irregular over to the east from here. The travelling has gone so much better since the first day. It did not rain all night and though it was misty in the morning and the tent got packed away wet, I rode 220 miles making a dent in the distance over to Les Gets and Geneva that suddenly seemed daunting having exhausted myself moving just over 100 miles. Apart from choosing the wrong booth at the motorway toll which exited me promptly from the system only having to swing round and rejoin and repay of course, it was welcome just to sit on a comfortable speed and take a break for increasingly stale rolls but tasty Spanish cheese en route.

The veins are standing out on my arms and hands uncomfortably with the heat. Last night’s campsite was the prettiest Ive stayed in so far with a lovely pool which I got some needed exercise in and a lovely looking terrace bar which I did not quite have the nerve to investigate. I tortured myself this morning plotting a twisty route to today’s destination and then gave it up for fear of taking on too much. The scenic routes are just so tiring to ride all day and some narrow hairpins – especially going up hill test my confidence at getting the bike round u-turn like angles. Instead I stuck to routes nationales which took me through some breathtaking gorges, up mountains and twisting down them again in a way that was not frightening but definitely fun. There are so many bikers around here that greeting them all gets tedious. Its rare to see lone bikers like me.

Of course these trips are like… they remind me of drug induced trips (how strange we use the same word). There is something about those short periods of altered consciousness, connected together across time that I remember. The feeling, ah, here we are again. And during one trip you are in the right frame of mind to think about how the next one could be better or different at least. There is something awkward about these solitary trips. I think it is the holiday context. So, I arrive at another campsite the only lone traveller, in fact the only traveller by bike. It is easier to blend into the background in a campsite than my first short trip in German youth hostels sitting on my table for Einselgasten (stigmatised singleguests). But something slightly hardcore appeals where the cutting corners, where the roughing it is central to the project, not a lack of doing it properly. Perhaps rough camping, where I’d be setting up camp and cooking a meal in the middle of nowhere, not surrounded by big white Dutch motorhomes and neat lawns. That would really feel like a focussed experience not the slightly misfitting experiences I have had to date. I had abandoned the idea of a Nordkapp trip in favour of the more agreeable climate and culinary delights of Spain and France but maybe it needs a rethink. I’m enjoying a chilled beer and a cigarette in the ‘snack bar’ here that serves good wine but horrible pizza. And it is so hot riding, my t-shirt is saturated with sweat each day.