I’m returning to London after a day at Motorcycle Live at the NEC Birmingham. Though I’ve turned up at the similar show in the Excel Centre in east London for quite a few years, this is the first time I’ve been to the larger event. These are always minor treats to look forward to in the winter months. I can imagine if it was held in July I probably would not bother to go. That said, for me the main pull is the chance to throw a leg across some new motorcycles, usually of bikes I would never buy like a Ducati Panigale, but this year some that I am in the market for, or rather will be next year. People do come away in droves from these events, with large carrier bags of gear bought at slight discount at the show, but I rarely do because the kind of equipment I decide I want (after painstaking research) is usually a little out of the mainstream to be hanging up in the racks of Infinity or other retailers – like the Klim Forecast rain gear which had to be imported from the Netherlands.

But back to the bikes. For a while I have been curious about getting a second bike, something far smaller than the 1200gs. 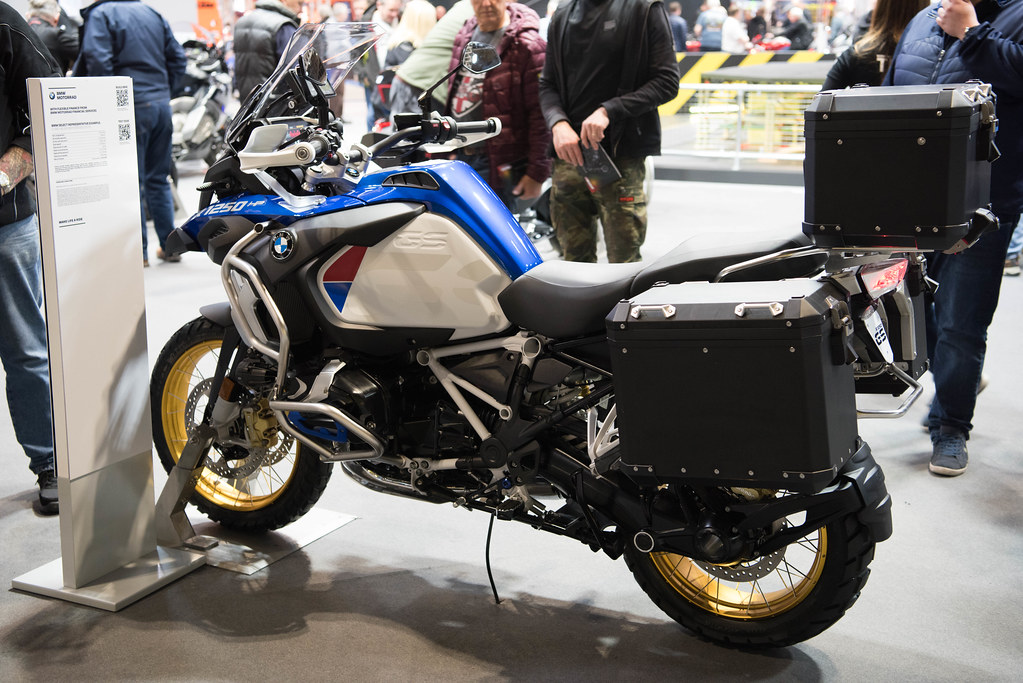 And last year’s travels in northern Spain on accidental tracks and the more deliberate gravel road of the Bardenas Reales made me a bit more interested in the idea of off road riding. You realise there is a biking subculture of ‘light is right’ exiles from the large adventure bike community. Suddenly those ever-heavier bikes with huge aluminium panniers seem less cool and desirable. Light is right has its own market niche of course with apparel, soft luggage, preferred GPS models and bikes of course that seem to keep turning up on websites and YouTube. I made a shortlist of three: a Honda 450L, KTM 690 Enduro R and Husqvana 701. 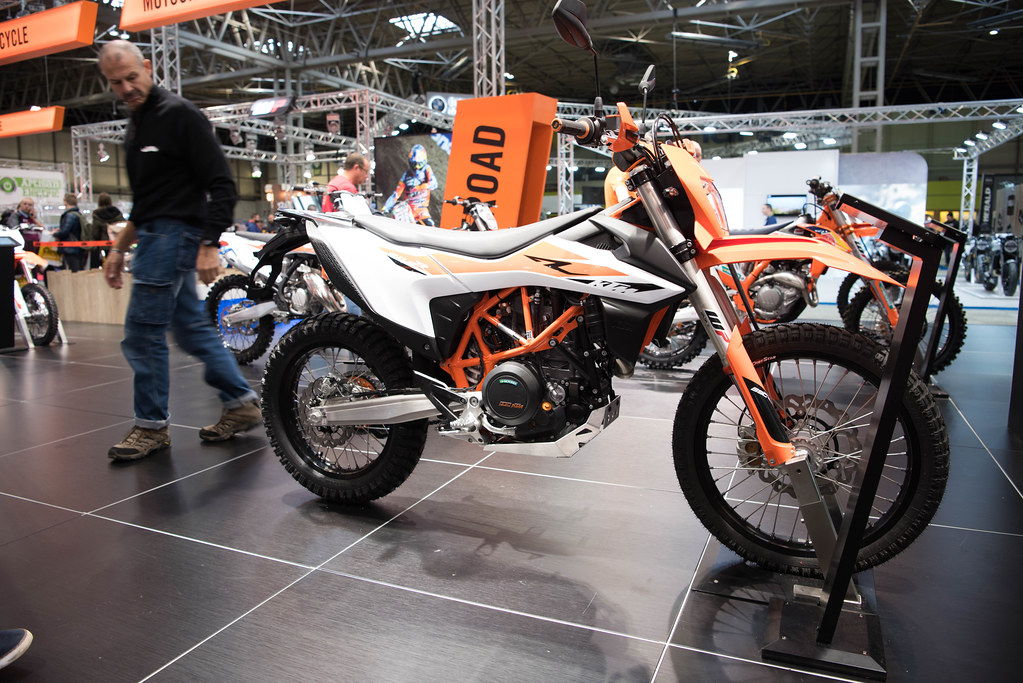 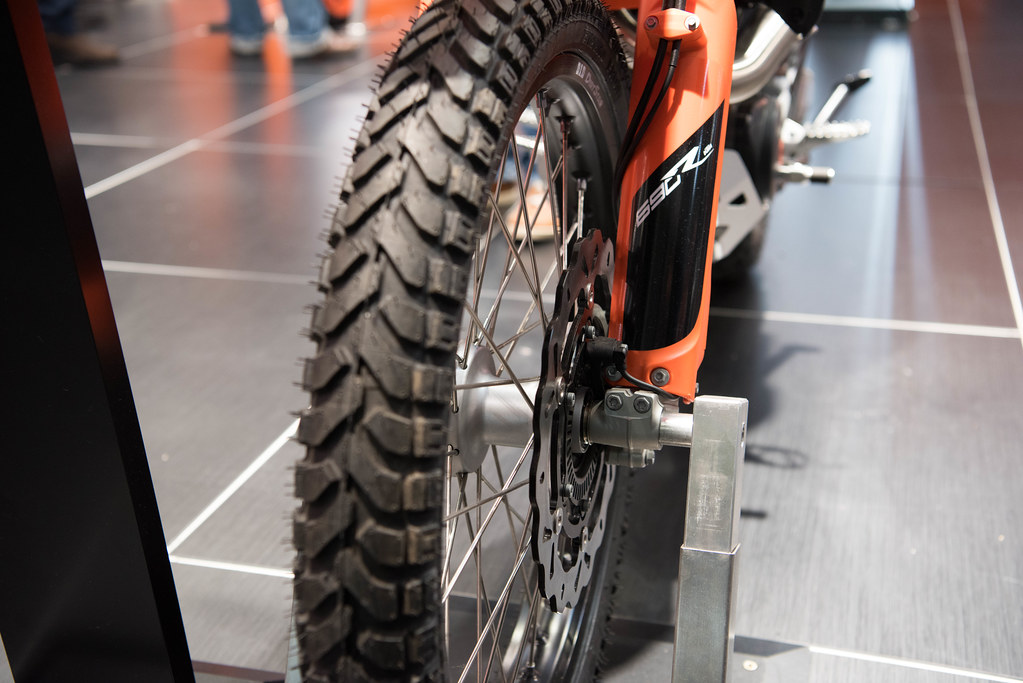 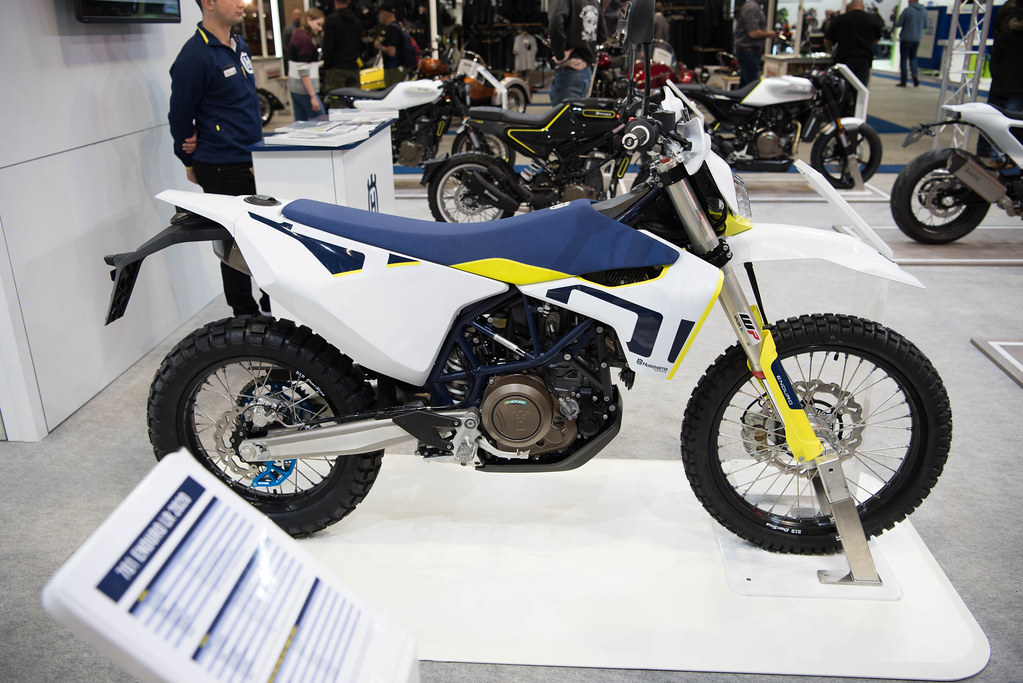 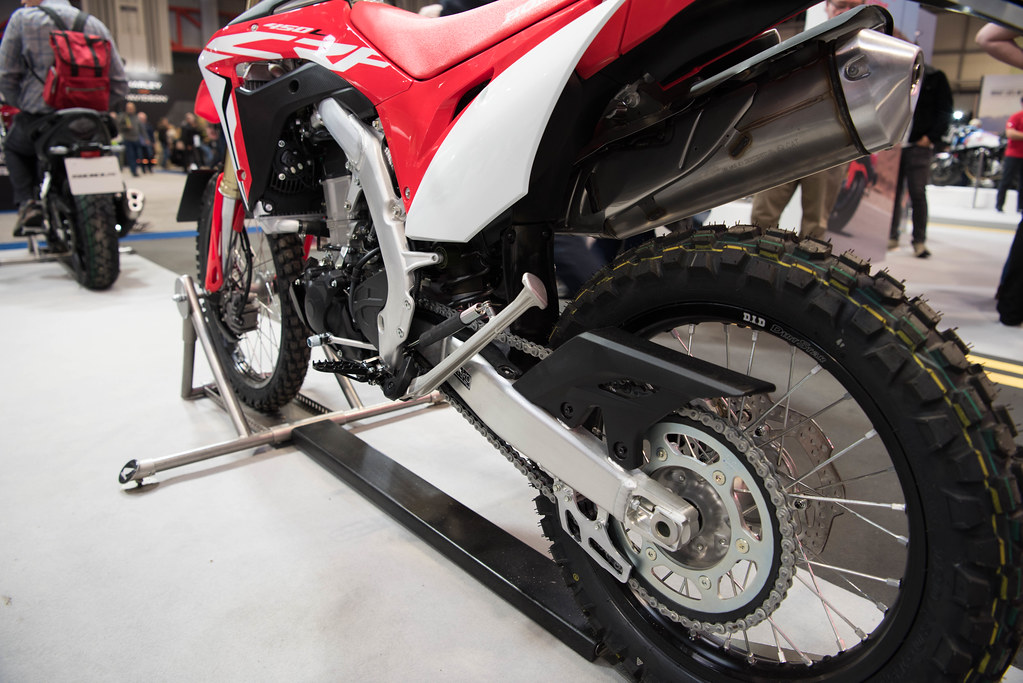 I had ruled out the Honda because, though it got some glowing reviews and inspired some rhyming couplets from Austin Vince (who was there in Birmingham in his overalls with his own muddy Honda – I’ve thought of things I wish I had asked him about), its range, its price of over £9000 plus the seat height (930cms) ruled it out for me. 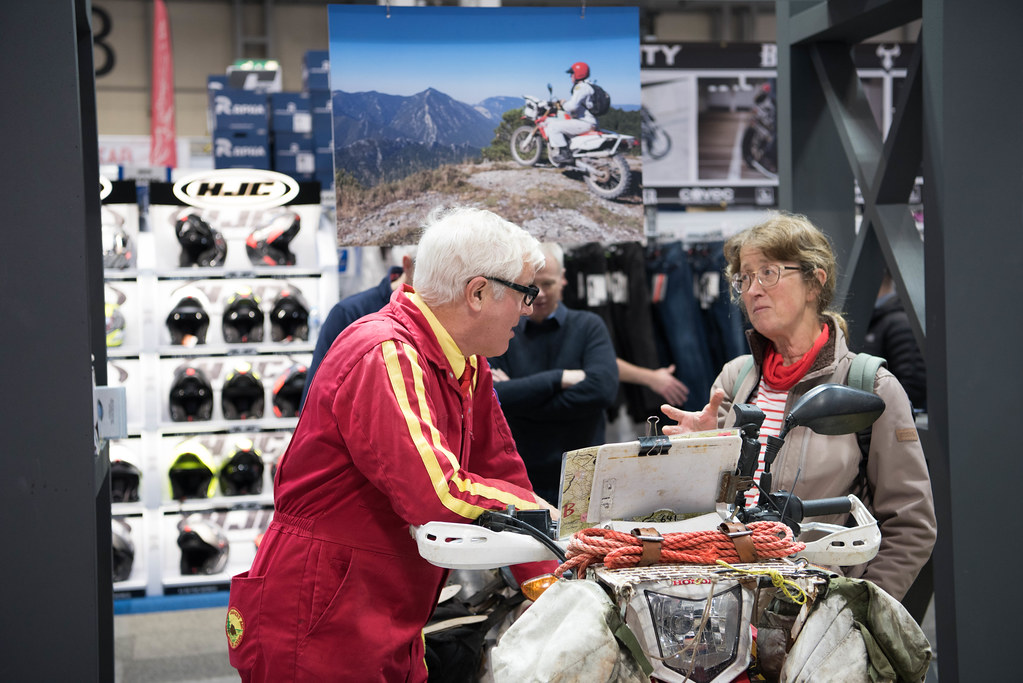 The KTM catches my imagination. It seems capable, and popular among those doing long trips with off road stretches. The Huqvana was at the show but it was intimidating and flashy. I could not imagine being seen with that bike. I would want the earth to open and swallow me up whenever I parked it. The KTM was extremely nice though tall – I’d want it lowered I think. I spent a lot of time sitting on it, looking closely at it and photographing various parts. But the surprise was the Honda which was a lower ride, with a slightly more comfortable seat than the KTM, though on paper, taller. I will look at its spec again when I get home. But compared to the gs – and to the Royal Enfield Himalayan which I also tried and was captivated by (it is completely unintimidating and costs less than £5000, you perch on top of these bikes, rather than sit in them. (Not to mention the BMW 310GS which I sat on and feels good but is a little boring). 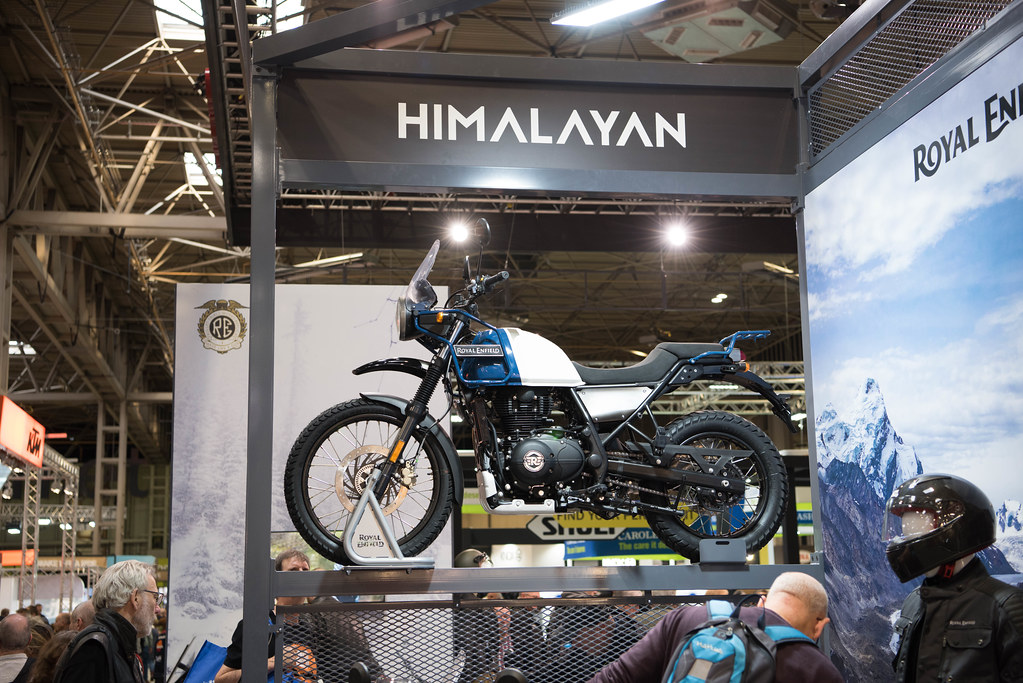 Also the larger KTM790, more of a conventional adventure bike, is lower-seated and much more comfortable. I’m not sure what scope there is for after-market customisation with the Enfield. There is a huge industry aimed specifically at customising or adventurising the KTM690 – which makes it much more of a fun option. I also tried the much talked about Yamaha Tenere 700 but found it bulky and more like a heavy adventure bike than the lightweight agile off-road gem it is meant to be. 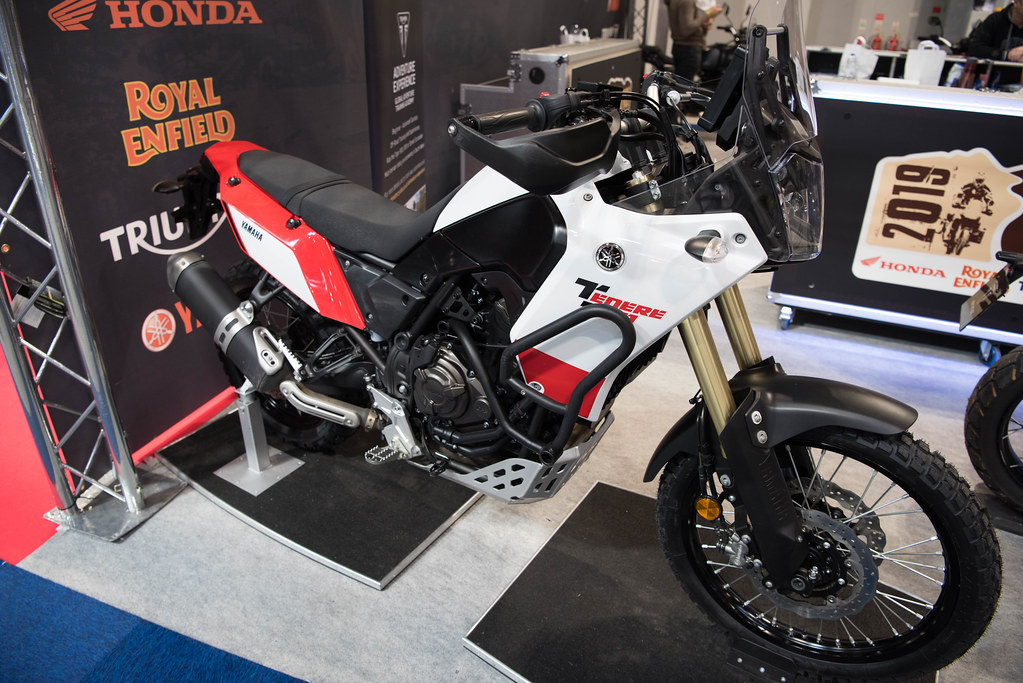 Also in the light is right department was the small Mosko Moto stall with some of their soft saddle and tank bags mounted, in a nice bit of marketing, on extremely dirty bikes. Touratech don’t seem to turn up at these events any more. I am not sure why. I always used to look forward to their latest catalogue. Now I keep my old copy safely – its the last one with pictures of Herbert and Ramona Schwartz.