A recommendation took me on a gentle trip up to Kerteminde to see the house of Danish artist Johannes Larsen and the marina there then on up to the tip of land with a huge wind blowing. The trip was about 100 miles. 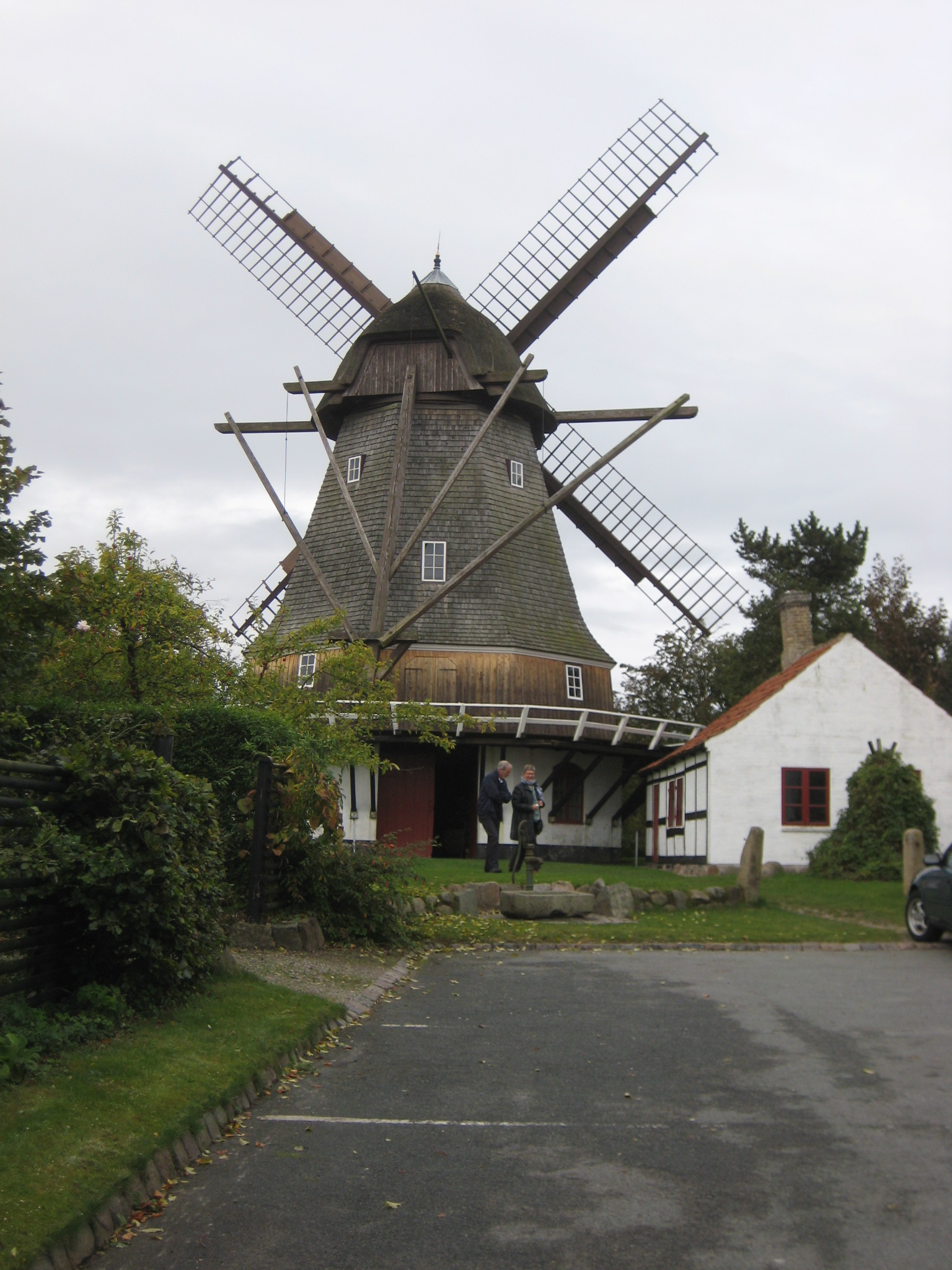 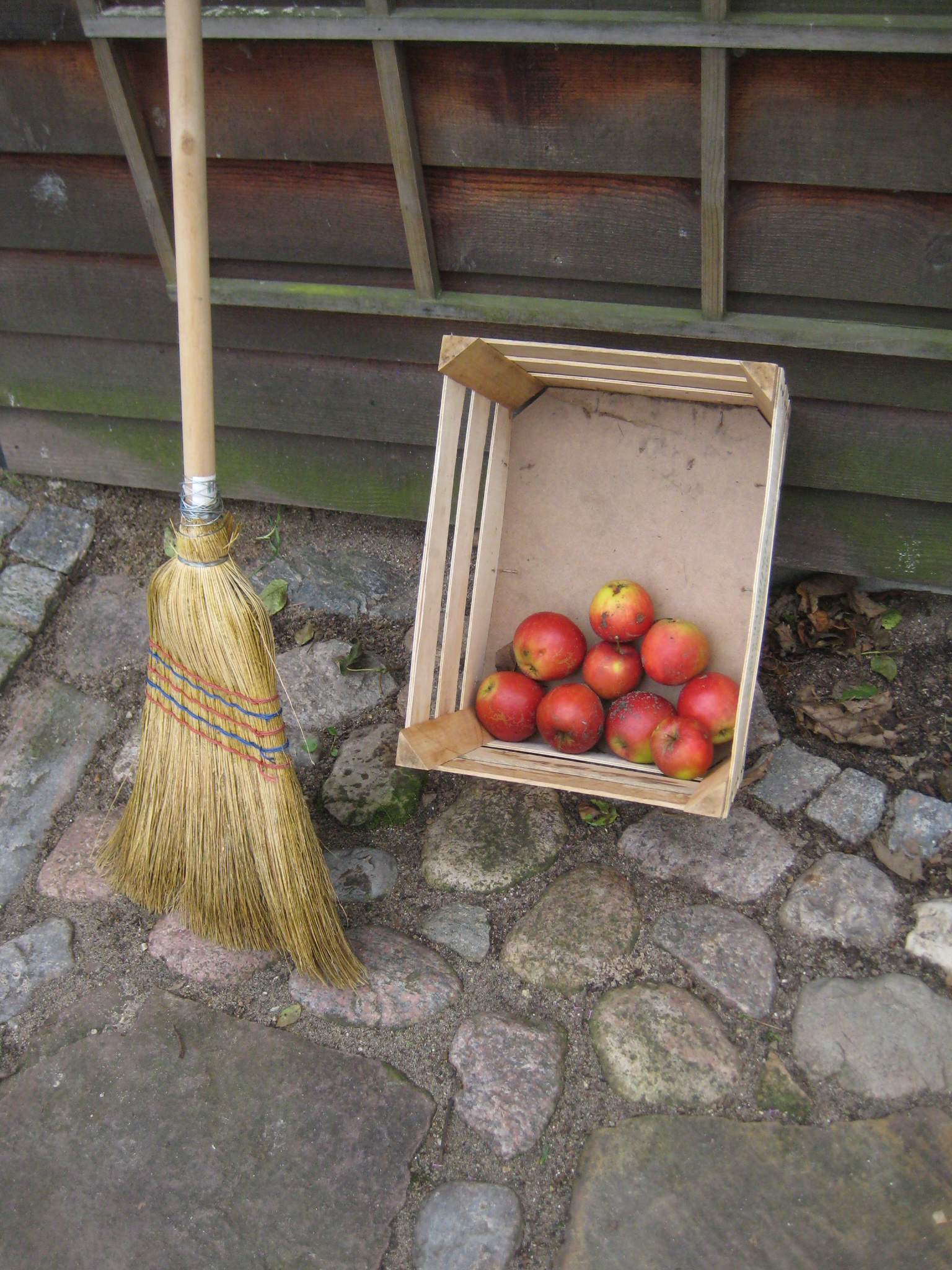 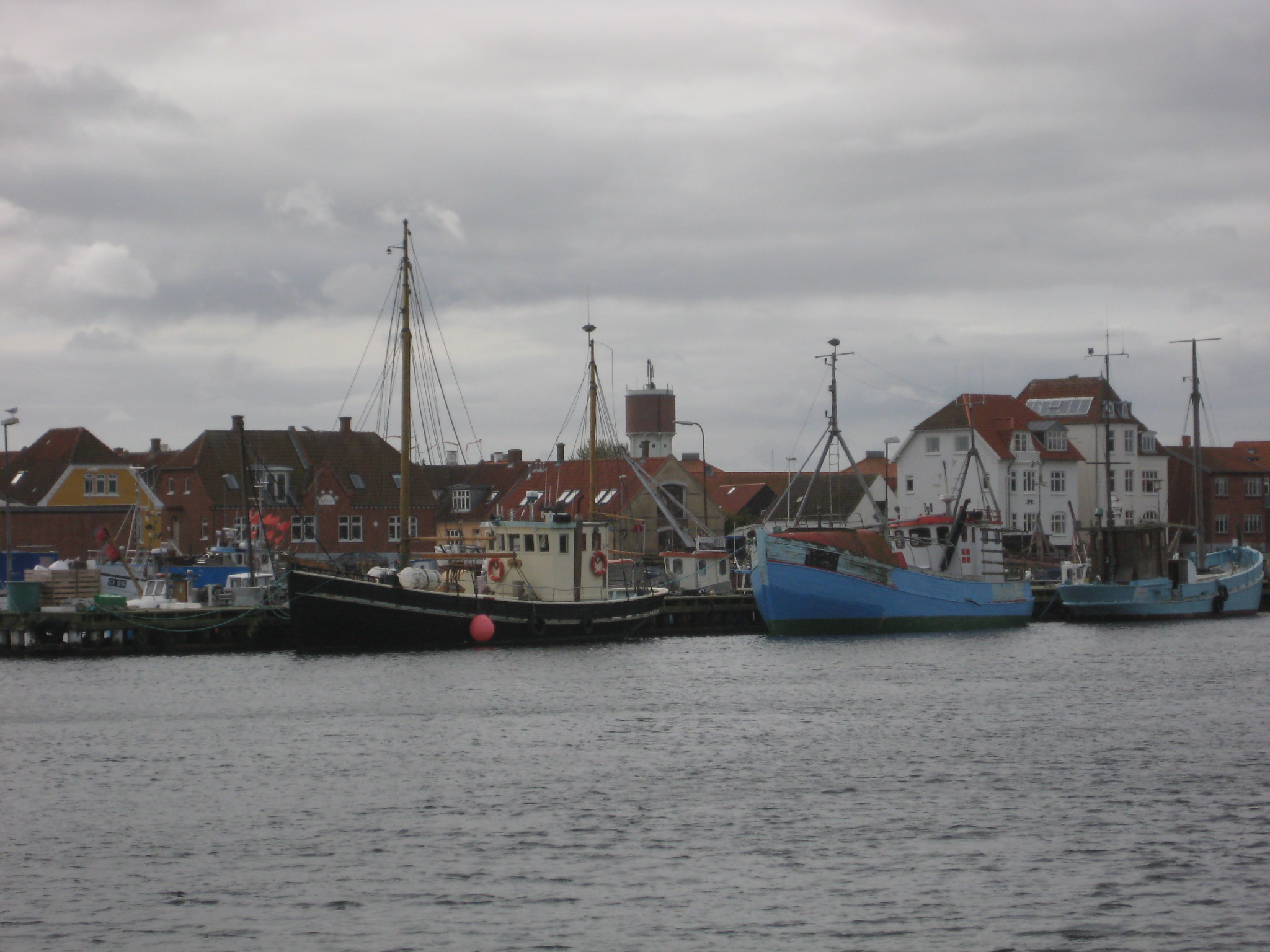 The return journey to Esbjerg, Harwich and home

20th October, 2012 At Esbjerg With Bertha neatly packed and Niels there to see me off from W B Winslows Vej, I rode away from the building that had been my home for the last six weeks with scarcely a wobble. A hundred yards down the road I noticed that the headlamp that had refused to light a couple of hours ago had come on which was a treat given Bertha’s rather dilapidated state at the moment, with bent bits and a liberal splattering of bloody flies.

The ride to Esbjerg is easy. Strangely there were so many German plate cars on the road and in the picnic area I stopped at. I suspect they were all going home from half term (they called it potato picking holiday in Odense) breaks in Denmark. (I watched Iron Sky the other night about the Nazis hiding on the dark side of the moon.) They would not have had much good weather – the Germans on holiday in Denmark, I mean – not the Nazis on the dark side of the moon. As usual I arrive in Dokvej a good two hours before they start boarding at 16.15. The weather is cold and damp and I’m glad now I put so many layers on. Also as usual there are exotic cars in the queue. I am not the first here. I’m third. And behind a cream coloured mid-1970s Rolls Royce Corniche. I go off to the kiosk around the corner for hot chocolate. I’ve had this here before and I watch the little ferry leave for Fano the small island just off the coast. But the warm kiosk is out of sight of Bertha and all the luggage with my computer and other things just strapped to her so I stroll back. By now another vintage sports car is behind me. 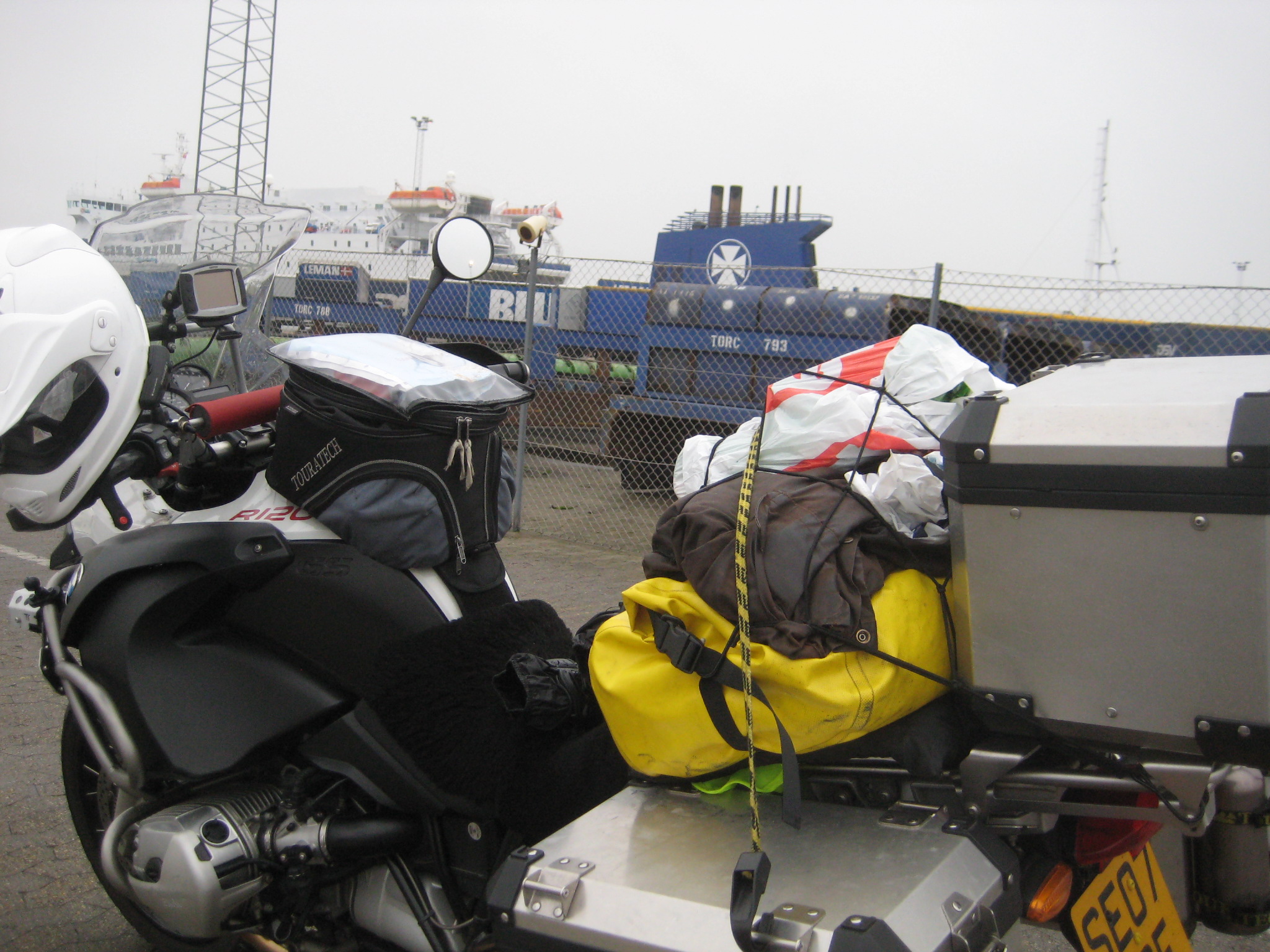 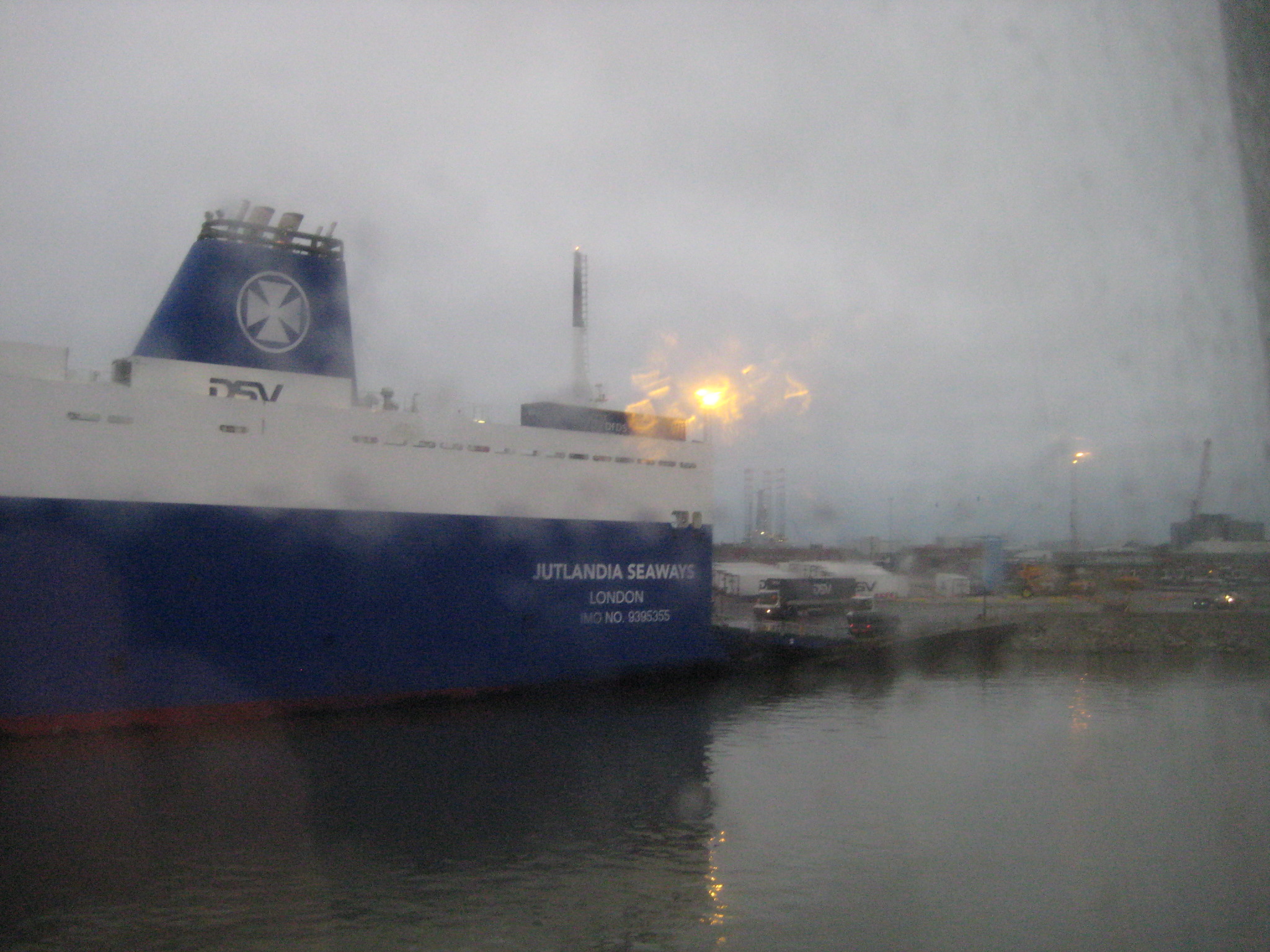 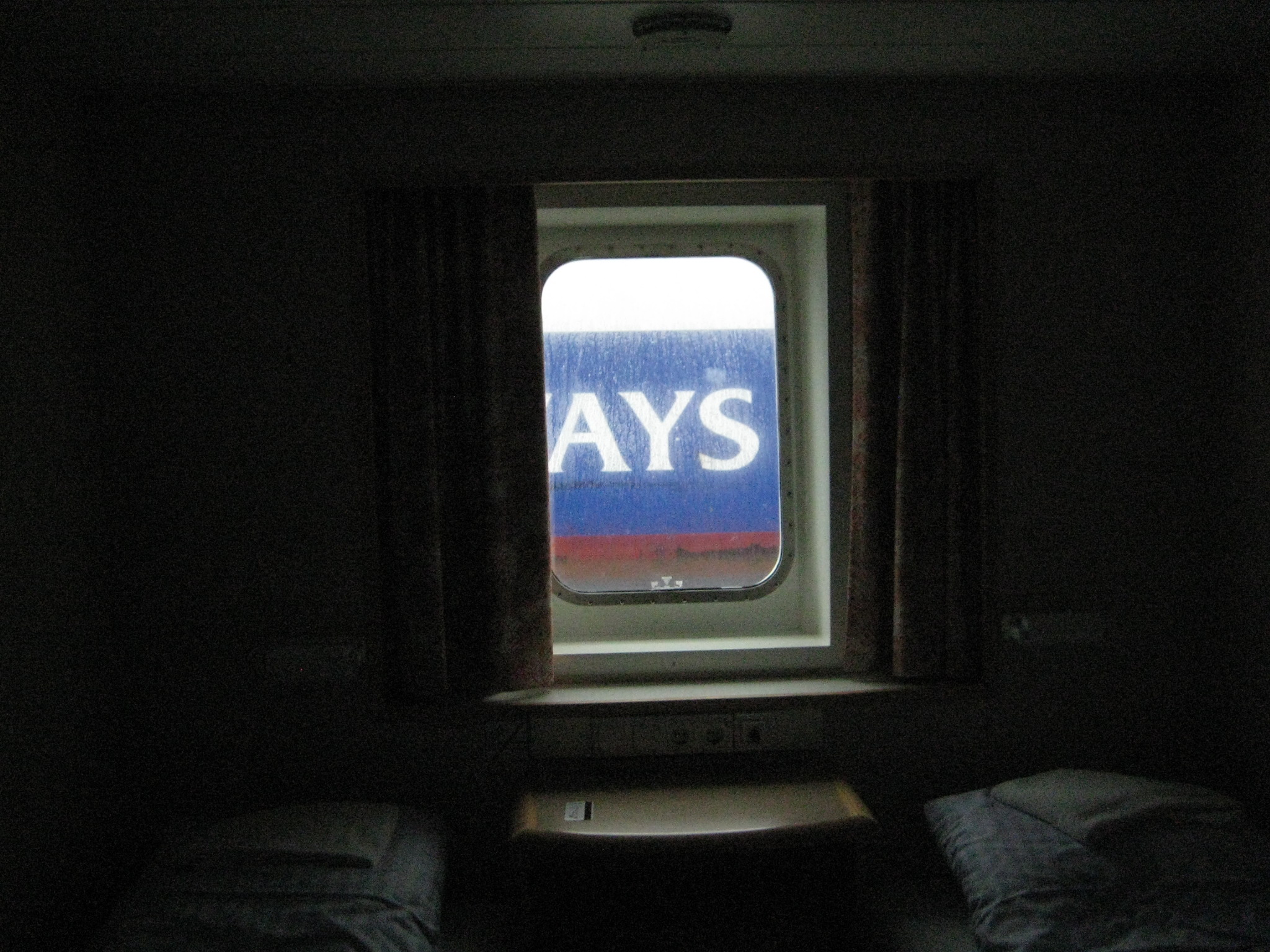 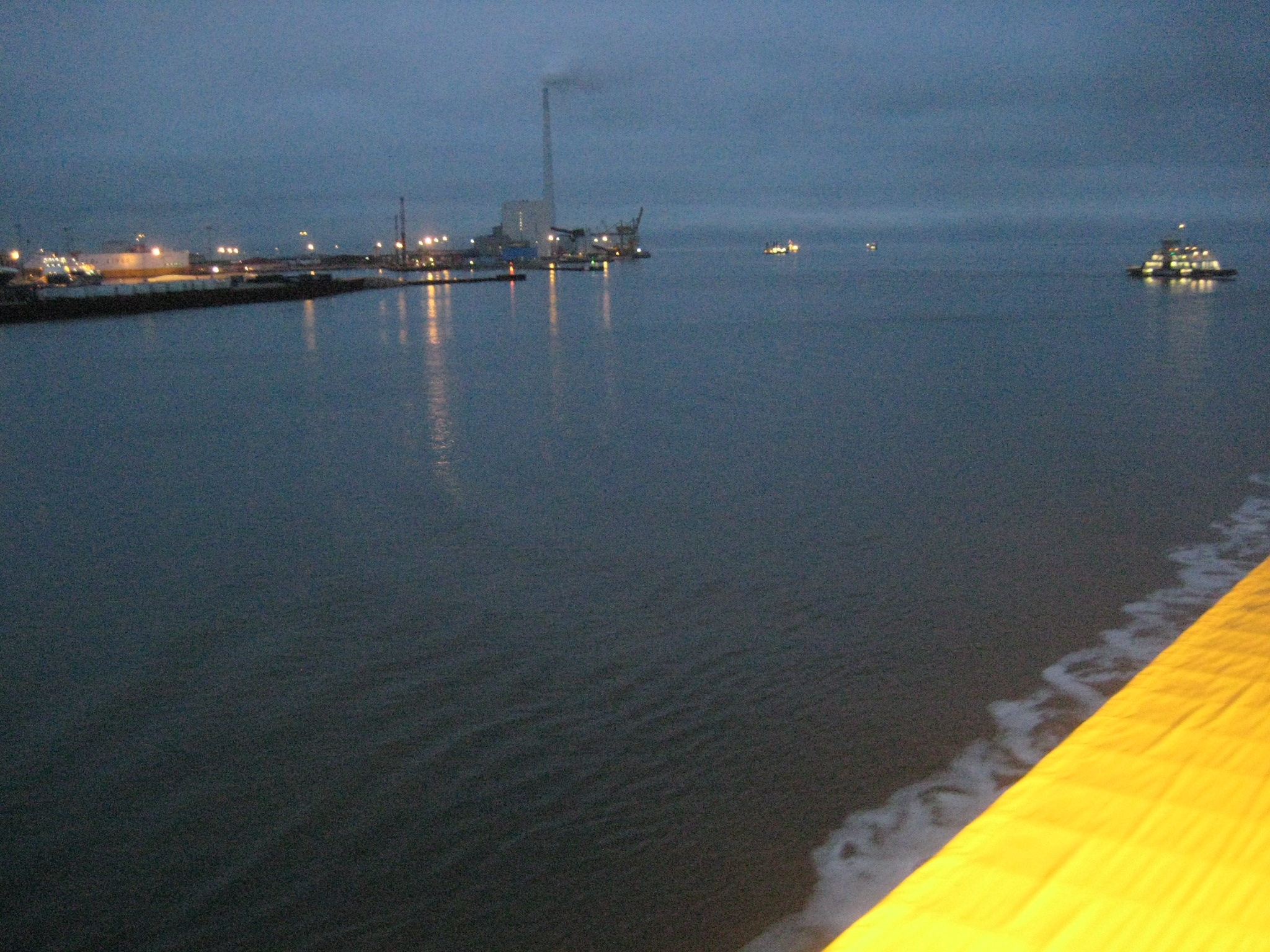 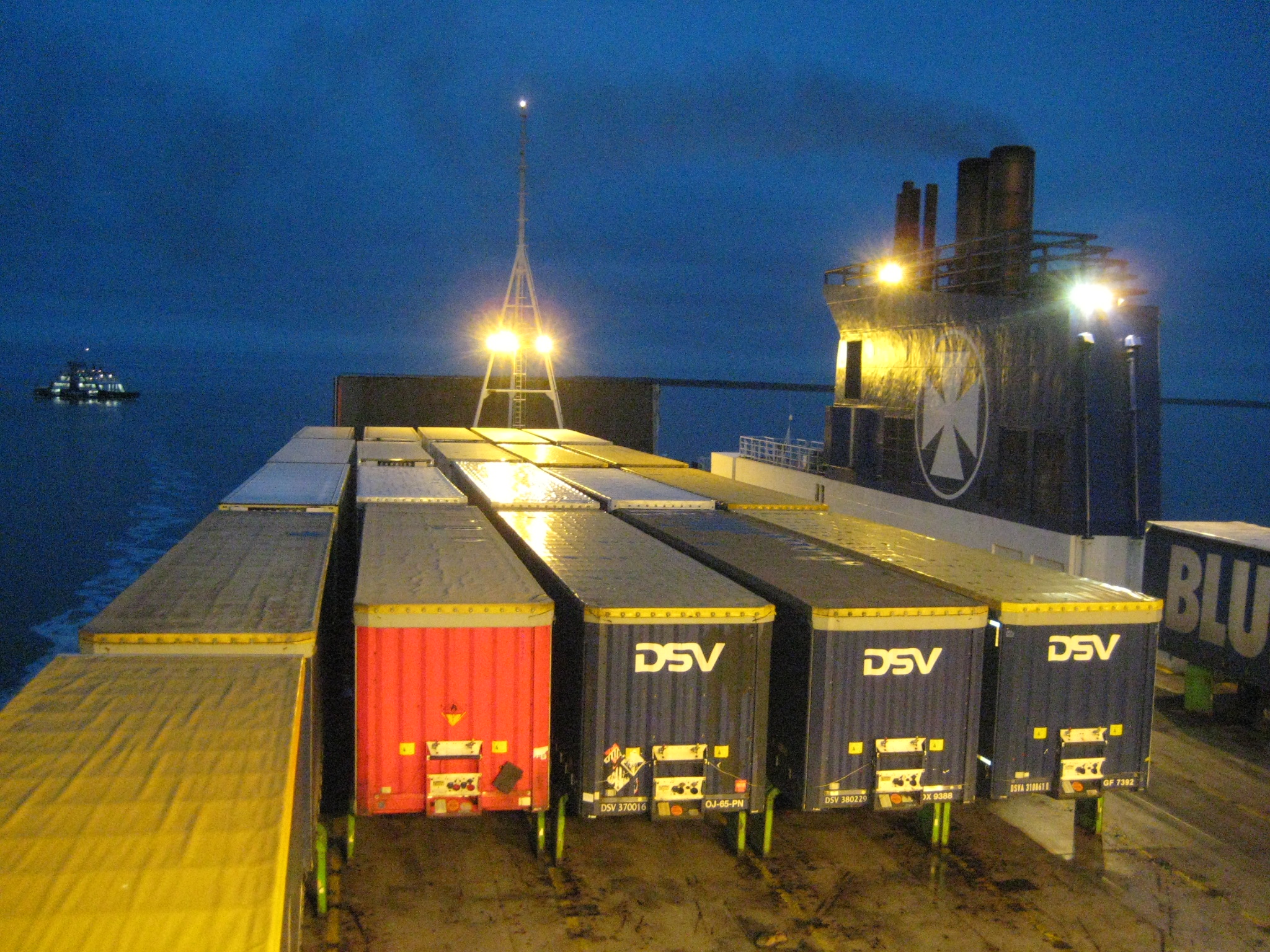 It feels like it will rain at any time. With motorcycle travel there is just no shelter from the weather and there is no shelter here at all. Just a tiny toilet and a bench. We go through check in and then queue again. In this last queue I talk to a man driving a van who tells me he has a house and life in UK in Oxford and another in the north of Denmark. He says he is a builder, 67, and can’t manage to retire. He collects vintage cars and watches. He is one of the Rolling Stones generation, with earrings, trendy outlaw clothes, a cap worn backwards, stubble and John Lennon shades. The sky gets gloomier as we wait for boarding. Finally I get into my cabin. I’m the only bike on board (well, obviously I’m not a bike), I ought to be proud of that. On the car deck a couple of guys get out of a big red van come over and tell me, with big smiles, they are going to make a documentary about the Dakar Rally. They admire my approach to packing the bike (well, that’s a first). I tell them that the bottles on the back are for vodka, which is partially true. They say I have the bike for the Dakar, I ought to do it. They obviously don’t know much about the Dakar yet if they think a heavy old 1200GS is a Dakar bike. In the cabin I immediately uncork my very drinkable wine. There’s a blast from the funnel. I’ve never travelled on this boat so late in the year. Its starting to get dark already. We start to pull out of the harbour and stirring music plays on the PA. (see the video – its true)

I’m on the same deck as Bertha again, as with a previous voyage from Esbjerg, this is the closest I’ve got to sleeping with her. I get up on the sun deck as quickly as I can to mark the event of leaving Denmark (though there is not a hint of sunlight). I watch the lights on the harbour and of passing ships come and go and I stay long after everyone else has gone and watch the lights on the coast recede. The ship changes course twice as it moves through the red and green buoys and again at each major twitch the car alarms sound. I am in a more sober mood than when I sailed out six weeks ago, partly because I am coming home and going back to work partly to do with the disappointing adventure aspect of the short trip to Sweden. I won’t dwell on that. Captain Larsen says there will be gentle breezes ‘from various directions’ that promise a calm crossing.

Finally, I ride back From Harwich through a drizzly Sunday morning back to Cambridge, unload and take Bertha to her garage. 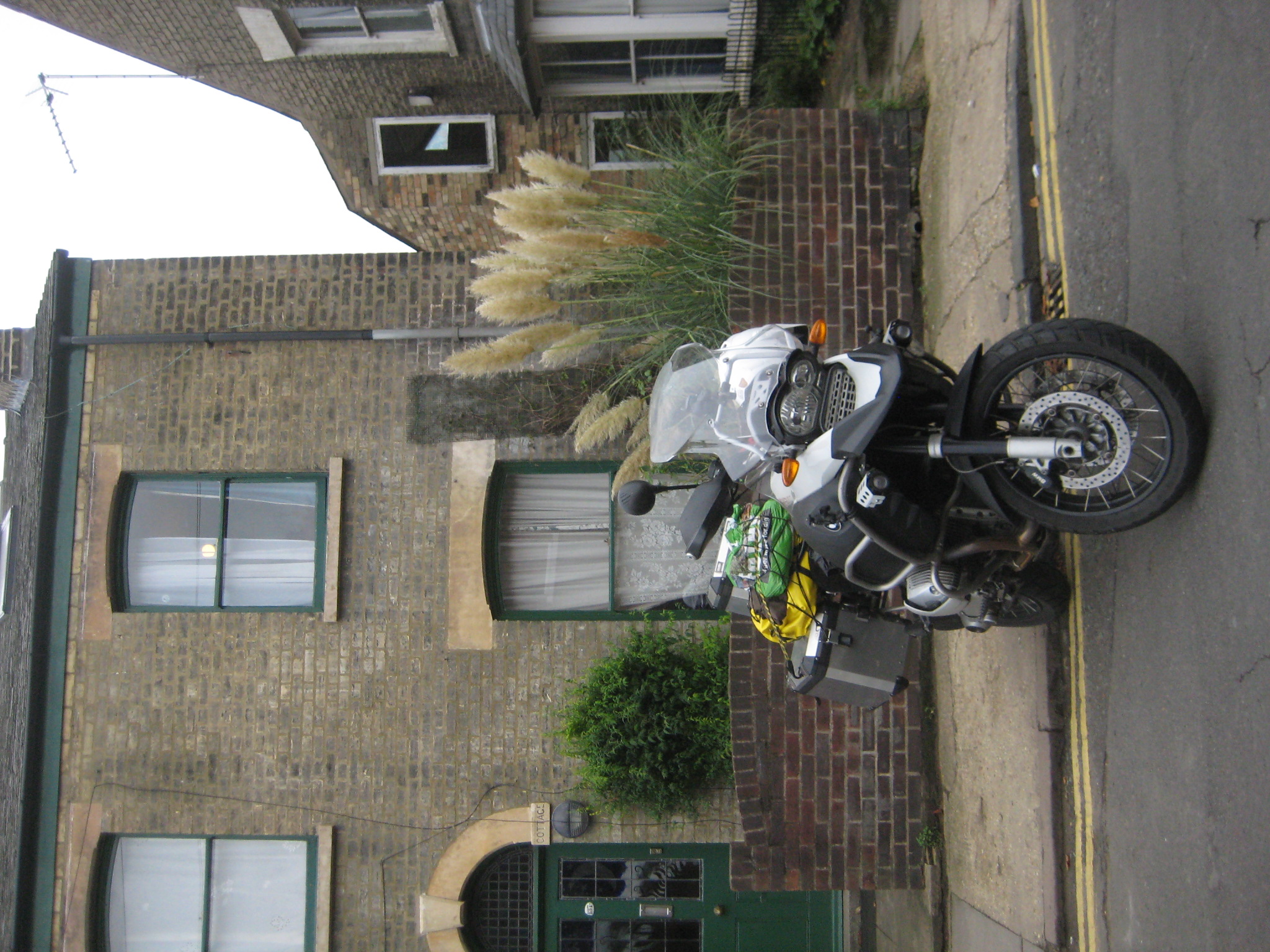 Some lessons for the next trip:

Give myself a break – head for somewhere sunny for once – France, Southern Germany, Spain.

Don’t surrender to eating dehydrated food. Make finding shops to buy decent local food part of the day’s objective before settling on a campsite. Cooking meat or fish outdoors is one of the pleasures of camping.

Consider buying a bigger tent so that it is not so meager crouching over all the gear, particularly when it does rain

Travel lighter; fit everything into the three metal boxes (so maybe don’t get a bigger tent) Don’t take so many electronics

Take a good book that will last the whole trip

Faaborg is a pretty little town with a marina about 30k south of here on the coast and is lovely to cruise around in this beautiful Northern European sun that lights up the terracotta tiles on every roof here. An old south African man made conversation over my bike, saying that it looked Japanese. Some people want to know everything, so after I had told him, yes I had been a nurse, he told me how he had been operated on by Christian Bernard – well, it was actually his brother and he used to know his daughter too, his kidney was smashed and two men arrived in the hospital in dress suits having been called away from dinner, one of them being Christian Bernard’s brother – presumably. The town has a small cobbled market that sells plants and flowers and features a supposedly controversial statue of a giant drinking from a cow’s udder. 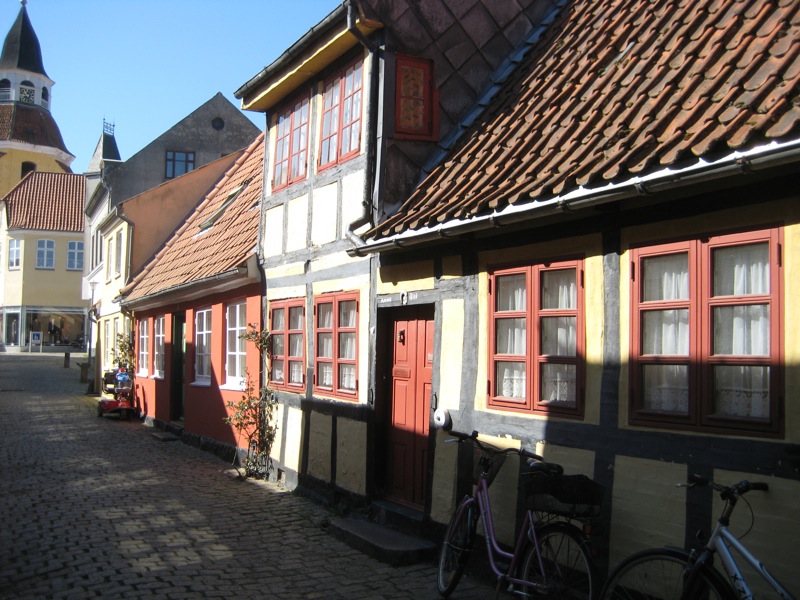 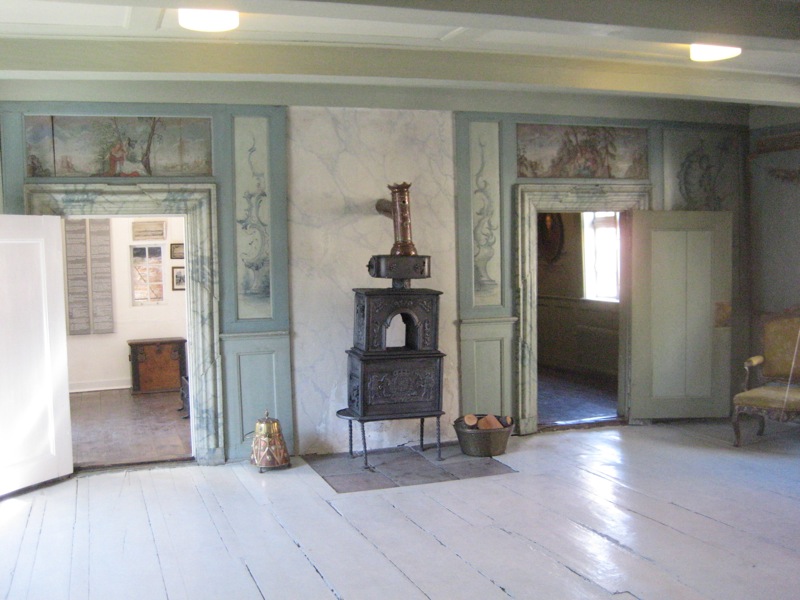 From there I rode along the coast toward Svendborg looking for the bridge over to a small long thin island called Langeland (I wonder why). Of course I got lost and ended up on a small island called – I cant find it in the guidebook. But thanks to my trusty GPs, I made my way across huge bridges to my goal.

Very rural but with a surprising amount of traffic. Ah, but getting back: what a gusty side wind, scary. Phew. No wonder I am having two glasses of wine before 5pm. Pics on my Flickr.

Phew. The sun is shining but I feel exhausted. When will I learn to work effectively with my GPS?

Where did I go on my route to find the easy-to-find E20? And I found myself pointing at the check in at Esbjerg all set to return 5 minutes after I arrived. But I am here at last and no one is impressed when I say it took 2 hours to get here (120k). 86miles; average speed 58mph The motorway ride here and the road into town was not that enjoyable. I’m not sure why. Perhaps the lack of sleep (I must have slept lightly from about 3.30 till 8am.

My host here at Angarhus is funny. He’s highly energetic and bodily enthusiastic, often adopting a particular pose to make a linguistic point. He says he is Basil to his wife’s (who just walked by) Sibyl. The room is unattractive and next to a slightly noisy junction but I have a lovely sunny balcony with a table equipped with terracotta ashtray. And there’s free wifi. And the sun is constantly shining. 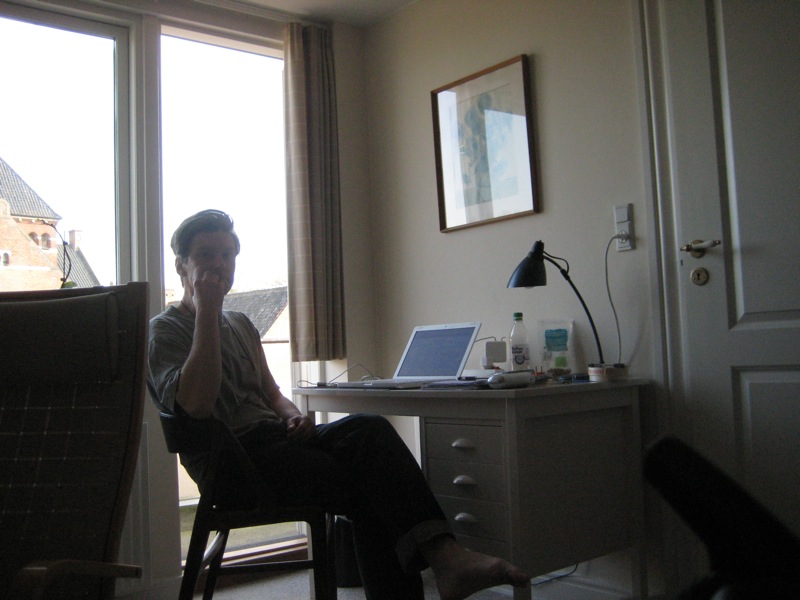 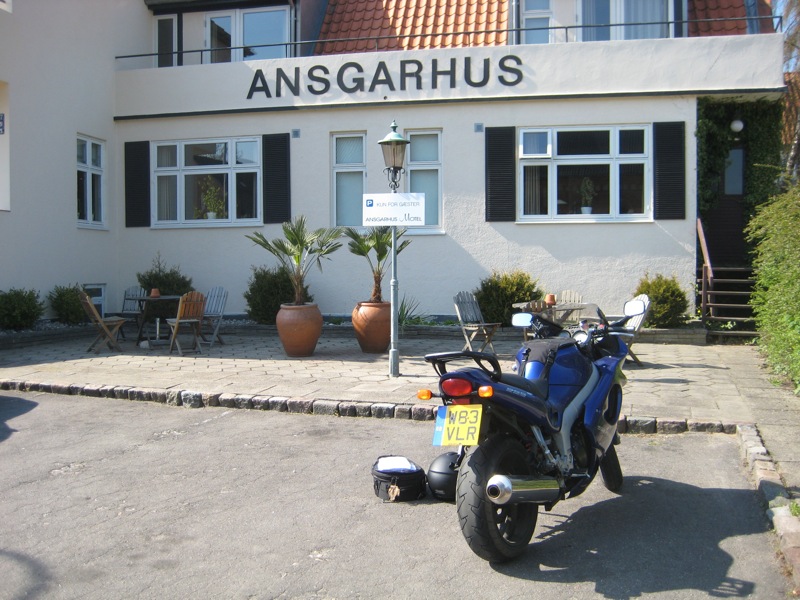 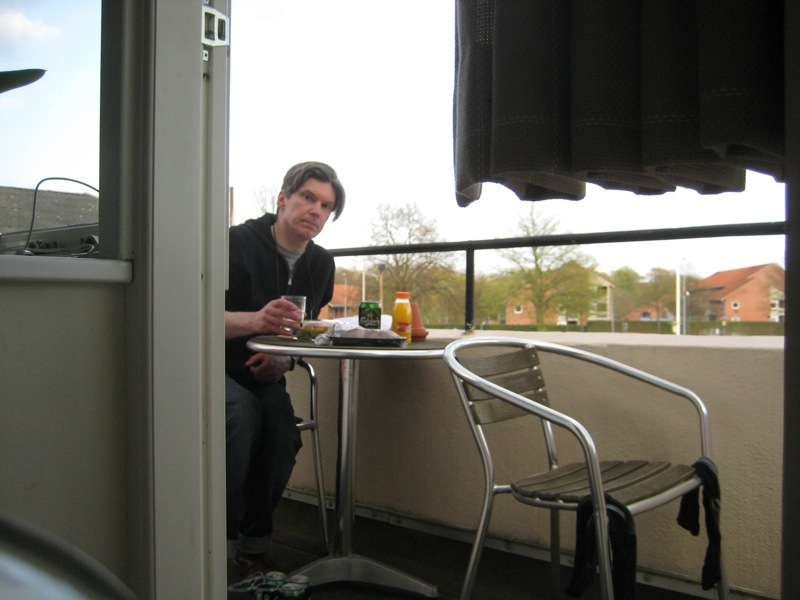