Today started nicely with a fond farewell from my hosts at Casa Camino. (Their kitchen was amazing I thought). Once wobbling down the stony drive, I was off, not very confident that the GPS would take me directly down to the main road after its confusions on the way there and my host’s disparaging remarks about Garmin and Spain (see later near disaster). But soon enough I was on the motorway travelling approximately east. I was trying to remember, as I rode, my previous visit, and in fact other early expeditions to Europe. I could not quite get back in touch with them but I had a sense that my concerns and focuses while travelling had shifted. But this morning, with a good road, very little other traffic and courtesy of cruise control the first hour or so travelling was very relaxed. My equanimity gradually unravelled though. First, it started to drizzle and the temperature dropped, then I discovered that the signs indicating what in the UK would be a motorway service station, are in fact pointing to scratchy old petrol stations and two or three miles off the motorway in a forlorn town. But being fuelled up is a good feeling and, via one blocked off re-entry to the motorway, and much riding in drizzle behind slow moving cars, I was back up to speed, but getting damper and needing to find somewhere to re-establish homeostasis in the face of the growing pressures of the body and two cups of coffee, and three glasses of orange juice at breakfast. So the next phase of the journey was not as relaxed at it could have been. I eventually stopped at a service station – a rare cafeteria by the motorway. These places are definitely not the shiny chains that you encounter in the UK, but places with a few tables and a long bar, with some recently made food on top. I ordered café au lait and tortilla then headed off. All going reasonably well from the motorway to an A road but still not confident that the GPS would take me where I wanted to go, along the route that I expected. Ok, it said, turn right. I obeyed. Turn left to join the – number of the road I had just been on – and then the tarmac road turned into a woodland stony track plunging downwards, then into a muddy puddle, still with the GPS urging me on. But when the track curved off steeply down to the right I decided to cut my losses and turn the bike on what looked like the last bit of disused tarmac that remained from some ages old road – a godsend as to turn the fully laden bike on a narrow track running down hill would have been a huge challenge. Hopefully all this is captured on helmet cam.

But back we went this time through the mud without slowing down or skidding and another 4k down the road before turning off to the left, over a level crossing, down narrow twisty lanes. I have grown nervous about the entrance to rural hotels and campsites and the Palacio is no exception.  It has a steep drive made of irregular cobbles. I stopped to gauge the challenge then went for it, going rather faster than I wanted to but making it up without dropping the bike – the vision of which always quickly flashes unhelpfully into my mind.

The Palacio is not what I imagined, especially after three days of rural simplicity and newly refurbed buildings. This is a rather swanky hotel/restaurant/wedding reception type place with floral wallpaper and floral coverings on everything possible, doyleys, antique dolls, rocking horses and cots on every landing. The staff that I have come across, though, seem friendly and helpful, telling me that the restaurant is closed on Sundays but offering a snack instead. In fact, now that I have gone down and been served by them a generous platter of cheese and meat, with two glasses of unusual white wine, their hospitality has won me over. I talked with one of the owners afterwards for quite a while about her daughter who is studying at Greenwich University. There was a wedding here last night and the last guests were driving off in Mercedes as I arrived and now workmen are dismantling the base of the marquee down on the lawn – using my favourite noisy power tool to undo the hundreds of screws. 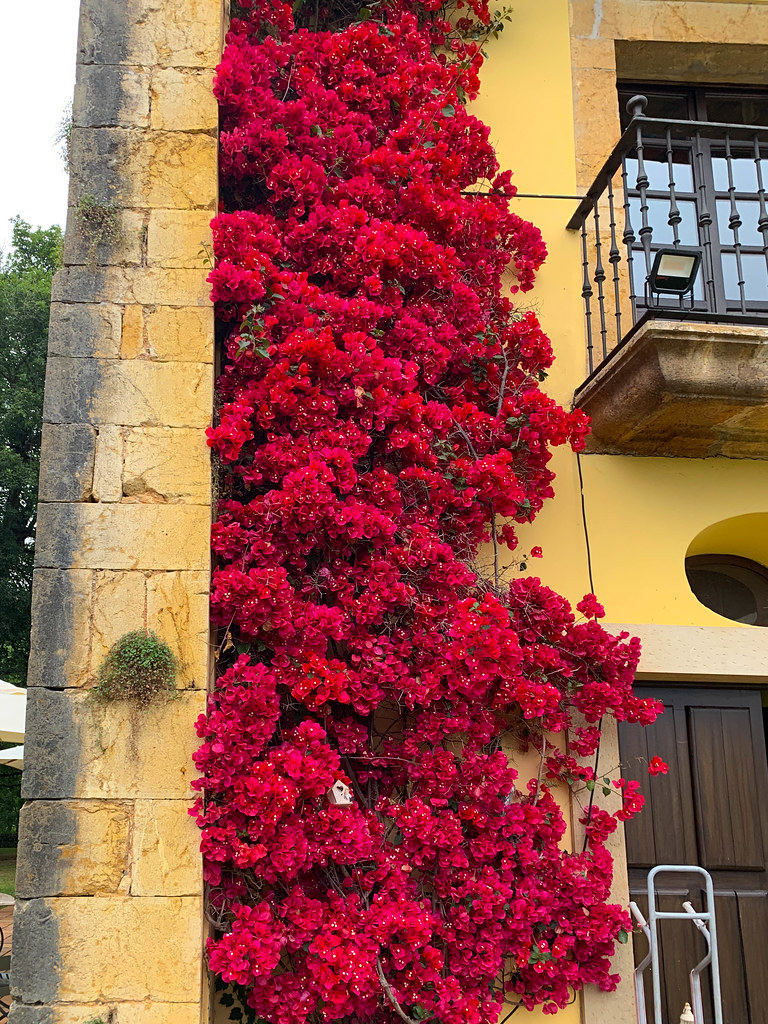 My room is under the roof, with an old-fashioned bathroom suite and it required some window-opening to get a breeze into the musty atmosphere. So I made it with the usual minor dramas and high anxieties – leading to the usual sense of exhaustion. But the wifi seems strong here which is a real treat.   I have to decide how to spend tomorrow and the squaring up to the challenge of riding up that dreaded drive if I ride out somewhere.

The GPS tells me that I spent four hours riding a total of 213 miles.